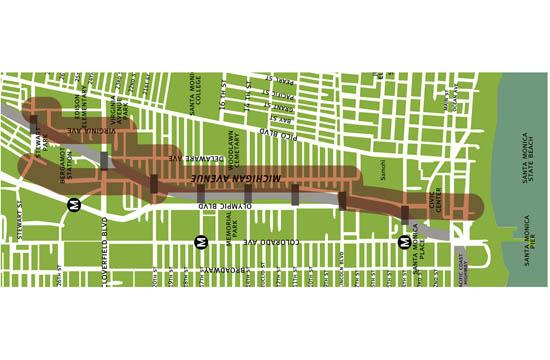 Bergamot Station seems to be on Santa Monica’s mind these days. The City Council has two Bergamot Area items on its upcoming Tuesday agenda, while planning commissioners are taking a stab at Hines’ request to enter into a development agreement (DA) with City Hall.

Plans presented by City staff seemed well received overall, yet there were still a few concerns raised by commissioners and residents alike.

“It’s such a vital corridor here,” Gary Kavanaugh told commissioners, adding he lives in the area where the Greenway is proposed and regularly observes bikers traveling to and from Samohi.

The interaction between cyclists and motorists was a key point of concern on the dais and among members of the public who spoke at the final Planning Commission meeting of August.

One resident, Shawn Killinger, told commissioners two-way access to the neighborhood was an important issue.

With so many tourists in Santa Monica, she pondered whether confusion would rule as cyclists and motorists negotiate a right of way in one of the proposed traffic circles.

On the dais, the Greenway’s impact on residential permit parking was a significant concern.

Commissioner Jim Ries focused on parking and cycle tracks. He asked City staff whether angled or perpendicular parking could be considered.

Similarly, Commissioner Richard McKinnon asked City staff about the potential loss of parking in order to accommodate the Greenway.

“I understand … parking is going to be a big issue and there will be a backlash from those residents,” Ries said.

Funding was also a concern meaning construction could be delayed. Metro funding, for example, might be five or six years away.

Another issue raised by commissioners and residents alike was the volume of traffic on Michigan Avenue, something the Greenway hopes to address.

As for the actual concept plans, the Michigan Avenue Neighborhood Greenway entered into the City’s lexicon in light of principles presented in the Land Use and Circulation Element (LUCE) and the Bike Action Plan.

“A future Greenway would provide residents and visitors with a safe and comfortable place to walk, bike, and interact with neighbors, all while connecting the community to important destinations including schools, job centers, and future Expo stations,” City staff stated.

Consistent with the project’s name, the proposed Greenway, according to City staff, “primarily travels along Michigan Avenue, with a beach connection on the west end and connections to Bergamot Arts Center and the Expo bike and pedestrian path on the east end.”

“As an important component of the City’s No Net New Trips strategy, the project is … is a backbone bicycle facility of the network envisioned in the Bike Action Plan,” City staff stated. “The project also furthers LUCE goals of enhancing neighborhood quality of life, by introducing informal spaces for social interaction and through additional trees and landscaping. The project will make it easier to get around Santa Monica on foot and by bicycle, and is intended to enhance the livability of the neighborhood and improve environmental quality.”

City staff added the proposed Greenway, if realized, would serve several local communities, including young and senior residents as well as commuters who rely upon walking, biking, and/or transit to get to work.

A community workshop is set for Sept. 21, allowing residents to provide additional input on the Greenway.