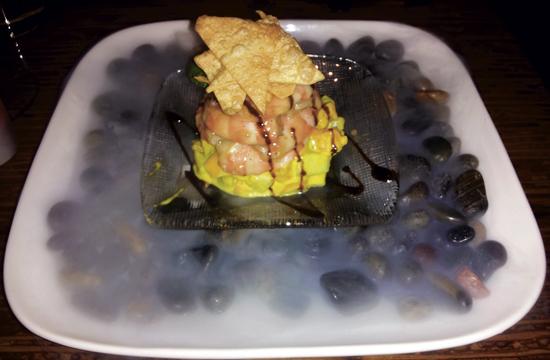 Loews Santa Monica Beach Hotel switched to its 2013 summer menu at its Ocean & Vine restaurant in the first week of June due to construction on its patio.

Now Executive Chef Keith Roberts said the menu will run a little bit longer than usual this year – late November – so locals can enjoy his latest creations now that renovations are complete.

Roberts explains some of his new summer dishes and what makes them unique.

Fresh Bigeye tuna is seared on the outside, covered with black pepper and torched on the outside to achieve a smokiness out of the pepper. There is a drizzle of ponzu sauce over the fish, which is then topped off with scallions and fried wontons to add a crispiness element.

Roberts said this year’s summer menu was full of fresh vegetables to add as much color as possible.

“What we do is a classic chilled asparagus,” Roberts said. “For me as a French trained chef, the best way to highlight asparagus is with a hollandaise. That’s how I topped it off – with a lemon mayonnaise, a chilled hollandaise if you will.”

Along with fresh chilled asparagus, there is diced asparagus with hearts of palm and a little bit of bell pepper. Then on top of that there is shaved asparagus. It has crunch to it while being covered in a light dressing of red vinegar, herbs, and black pepper.

Roberts said this dressing adds a little bit of sweetness to counteract the tartness of the asparagus.

“Asparagus is in the cabbage family so it’s going to have that bitterness to it, that’s why it blends well with slaw style dressing,” he said. “On top of that, we take those same shaved asparagus and fry it real quick to get it crispy.”

On the side is house made sun dried tomato powder and a blue cheese mousse.

“The sharpness of that blue cheese on your tongue just goes great with the asparagus,” he said.

A little taste of India can be found on the menu on the coastal appetizers section of the menu in the form of chilled tamarind shrimp with papaya curry.

“I have a friend who is an Indian chef,” Roberts said. “I just like the way he played with some balsamic and some of the curry and Indian flavors and brought them away from Indian food and brought them closer to the American palate.”

He said he played around with several variations before finalizing the dish.

“You’ve got this sweet curry, papaya, and this cucumber,” he said. “The crisp, raw, cucumber has a gassiness that some people find offensive. When you put cucumber in here with that papaya and curry, it just comes together.”

He said the shrimp combined with tamarind achieved the tropical Indian theme he was after.

“It’s topped with papadums that are such a fun little crackle and I try to use those wherever I can,” he said. “The dry ice presentation is something I’ve been trying to have fun with.”

To challenge himself with the seafood section of the menu, Roberts developed the idea of a paella.

“Paella is a peasant dish,” Roberts said. “It’s a casserole and how do you do a casserole in a fine dining restaurant? It’s hard to do things like that but I decided to have some fun with it.”

He said he takes an artisan chorizo from Spain and braises it, making it softer and lets the flavors from the chorizo absorb into the dish’s sauce.

“A classic paella has heavy saffron infused rice,” he said. “A nice nose of saffron is one of the key flavors in paella of course. We use a nice local halibut filet. I love halibut, but it has that tendency to have what some people would say is dry. So I tried to counteract that by keeping it thin so it doesn’t over cook – we just flash it in the pan. Searing it in egg also keeps it extra moist.”

On top of the halibut is shellfish and clams, served scampi style.

“We take the clams out of the shell raw and sauté them so we get that nice garlic lemon butter feel to it,” he said. “On top of that we just play with the ceviche. We have ceviche on our happy hour menu, so we just played with that. We added some saffron to get that fun bright yellow color and to keep it a nice summery dish. I think we did a good job deconstructing it and putting it back together in a little bit different fashion.”

“When most people think Mahi Mahi, places like Hawaii or Mexico come to mind,” he said. “I just tried to keep the colors bright in the dish. We went a little bit tropical with the pineapple and the Tatsoi spicy marinade. The pineapple balances the spiciness and we bring it even more into summer with a corn and avocado sauté, which is fresh corn, not cooked at all, just quickly sautéed so it keeps that crunchiness and the avocado for the richness and a little bit of cream cheese, just enough to bind it. Then of course we put a pineapple passion fruit dressing. Mahi Mahi has just got that great flavor that blends well with the fruits.”