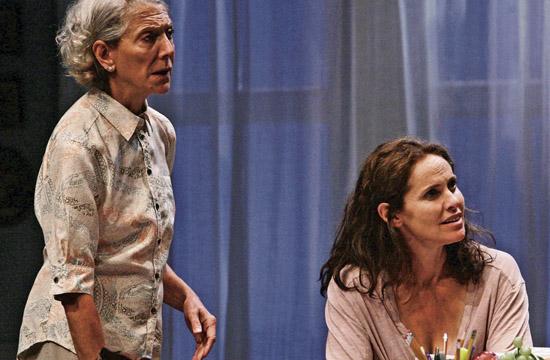 Before I get down to brass tacks in reviewing Gina Gionfriddo’s “Rapture, Blister, Burn,” on stage at the Geffen Playhouse via New York’s Playwrights Horizons where it premiered, in an effort to put a context around her play, I feel compelled to do a brief history of the feminist movement, highlighting some of the key figures during that historic period.

During the heyday of the “Second Wave” women’s movement in the 60s, those of us of a certain intellectual and higher consciousness persuasion joined ranks with Gloria Steinem and Betty Friedan whose book “Feminine Mystique” became a liberating salvo to those women who thought there was more to life than just raising children and baking apple pies, giving them “permission” to break free from those shackles.

Friedan formed the politically active National Organization for Women (NOW) whose charter was to bring women into mainstream society and to give them equal partnership with men. It should be noted that she was opposed to bra-burning radical groups that attacked men and women who chose to be homemakers.

Gloria Steinem launched the pioneering, feminist Ms magazine, which tackled such subjects as domestic violence and other pertinent issues of the day as well as participating in the creation of New York magazine for which she wrote a political column.

Then there was the infamous Phyllis Schlafly, author of “The Flipside of Feminism,” who opposed modern feminism and whose mantra was to fundamentally scorn equal opportunity saying basically you would rot in hell if you abandoned your basic role in life, which was to be an untiring mother and devoted wife who would work with her husband to reach his goals and not in helping other women reach their goals.

She denigrated Roe v. Wade referring to it as “the worst decision in the history of the U.S. Supreme Court…responsible for the killing of millions of unborn babies.”

The irony or hypocrisy of Schlafly’s advocacy for domestic bliss through subversion of woman’s possible desire to transcend the limitations of the nest, was that she was far from a domestic homebody having attended Harvard University, Radcliffe College, and Washington University and was an American constitutional lawyer who unsuccessfully ran for a number of political offices and who basically was able to have it all – family and career. Oh yes. She supported the microscopic brained, intellectually challenged Michelle Bachman and what more can you say about Schlafly’s judgment? Now we get to Gionfriddo play with a point of view that ultimately plugs into Schlafly’s opinion that you can only achieve happiness through domestic bliss.

We meet an incredibly successful, unmarried woman named Catherine  (Amy Brenneman) who is an academic genius, has written books, taught, and has even been on Bill Maher’s television program. She’s got it all. But does she? She has come home to look after her mother, Alice (Beth Dixon), who has just suffered a heart attack and is faced with the reality that when her mother dies, no one will care about her.

Act 1 is pretty much devoted to the women’s movement exposition which did get a bit tiresome but the real fireworks starts in Act 11, much of which takes place in Catherine mother’s living room where she is teaching a class suggested by Don which is basically an exploration of, among other topics, the balancer of power between males and females. The young Avery is the uninitiated voice that can walk both sides of the women’s rights issue as Catherine and Gwen each reveal their dissatisfaction with their lives. Catherine feels she has missed out on having a husband and children while Gwen feels she missed out on a career so we have the proverbial grass is greener and as it turns out for Don and Gwen, once you get there, it’s not so green.

In the meantime, Catherine and Don’s chemistry flame is relit and Catherine decides she wants to be with him again. It seems all’s well that ends well as Gwen is offered a deal to move back to New York with her older son and finish school and Catherine is to get Don back along with their younger son, thus satisfying her need for wife/motherhood.  But, such an unpredictable web is woven as Gwen returns from New York, dissatisfied with her new life and wants Don back. Don, too, is dissatisfied living with Catherine who is encouraging him to write a book and definitely, in the name of supporting and inspiring her man, tries pushing him out of his pot-smoking, porno addicted comfort zone.

Catherine realizes she has pushed him too far and says she’ll back off and he can do whatever he pleases with his life, but alas, to no avail, as he wants to be reunited with his domestic wife.

Avery, in her infinite young wisdom, advises Catherine that she should play with Don and then return him to Gwen because Don is mediocre and not nearly at her level.  Catherine pleads that she would be happy with mediocrity thus flying in the face of all her accomplishments, which doesn’t seem to hold much sway for her.

One of the characters at the end says that maybe Phyllis Schlafly was right at which point I dropped my pen.

Understanding that the playwright perhaps wants to illuminate the on-going struggle women might still be facing today, it was unfortunate that she ends her play with such a retrograded statement – especially for any young women who might actually be faced with these decisions.

The material is serviced extremely well as directed by Peter DuBois who keeps the action moving at a good pace and achieved excellent performances by this very talented ensemble.

The production is enhanced with excellent technical support including a wonderful multi-set design by Alexander Dodge, lighting by Jeff Croiter and Jake DeGroot, sound design by M. L. Dogg, and costume design by Mimi O’Donnell.

Perhaps the conflict over career versus family still rears its confused head from time to time, but surely in 2013 young women should be assured that like the hypocritical right-wing conservative Schlafly, you can have it all.