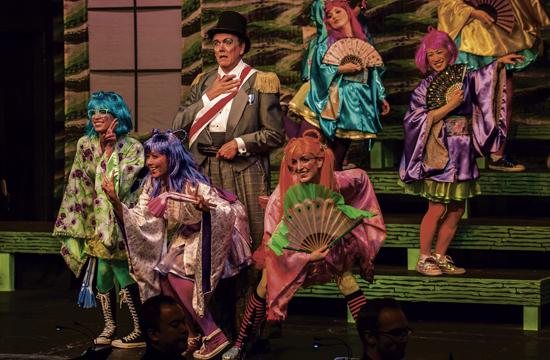 Performances will be held on various days and times today through Sept. 22.

POP takes this updated classic and transports it from the days of Japanese royalty in elaborate silk kimonos to gritty, modern-day Harajuku costume.

For the uninitiated, Harajuku refers to a particular area of Tokyo that spawned the wild mix of colors and styles that have become famous in current film and television depictions of young people in Tokyo.

Colors, patterns, garment types, and piercings abound to give this beloved classic a POP-worthy twist.

Never a company to do what people might expect, POP is sure to surprise even Gilbert and Sullivan aficionados who know the entire score by heart with its unique take on what was originally a thinly veiled skewering of then-current British nobility and politics.

Lyrics originally written to take a jab at people who may even have been in the audience will – in the grand tradition – be revamped to poke fun at modern people.

Since the costumes are inspired by such a mix-and-match ethos, POP has decided that instead of segregating the casts from each other entirely, the performance on Sept. 20 will feature a grab-bag performance, with a cast chosen at random, just to make things interesting.

With such an embarrassment of talent, it is only natural to want to see what happens with the new energy of an unpredicted combination of artists.

The talent onstage will be accompanied by POP’s outstanding chamber ensemble.

In both casts, Matthew Ian Welch plays the Mikado himself, while his disguised son Nanki-Poo is portrayed by Kyle Patterson and Matthew Miles on alternating nights.

The Lord High Executioner Ko-Ko is played by James Schindler and E. Scott Levin, while Timothy Campbell and Phil Meyer share Pooh-Bah, the Lord High Everything Else.

The two other little maids from school are Julia Aks and Jessica Mamey as Pitti-Sing and Elizabeth Rigby Jones and Aubrey Scarr as Peep-Bo.

In yet another twist which may surprise people who have seen it before, Pish-Tush will be played as conjoined twins – Daniel Cheng and Joseph von Bühler will be joined at the hip for all nine shows. Also appearing in every show of the run is Adelaide Sinclair as Katisha, a role she has performed throughout the United States over 200 times.

With such an amazing array of veteran and emerging talent, there is sure to be something in this performance for seasoned opera-goers and newcomers alike.

The Miles Memorial Playhouse is located at 1104 Lincoln Boulevard in Santa Monica.