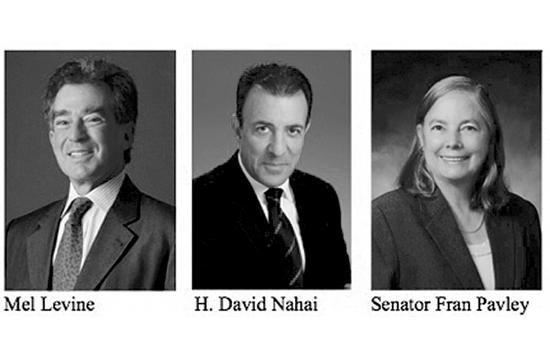 This is the organization’s first anniversary event and many who were instrumental in its creation will be celebrated.

The fundraiser gala will be held at the Annenberg Community Beach House in Santa Monica from 6-9 pm.

Its theme is the accomplishments and stories about the Bay itself told through the eyes of many – from environmental advocates, recreators, and patrons to scientists, businesses, and government officials – who have a strong connection to the bay.

Sheila Kuehl will emcee the evening. As state senator in 2002, she presented the legislation (SB 1381) that created the Santa Monica Bay Restoration Commission, the non-regulatory, locally based state entity charged with overseeing and promoting the organization’s guiding document, the Bay Restoration Plan (BRP). SMBRF is the non-profit partner of the Commission.

The event will honor its dedicated partners who have helped the SMBRF accomplish its far-reaching environmental goals:

In 1988, US Rep. Levine (D-Santa Monica) succeeded in getting Santa Monica Bay, one of the country’s most polluted, recognized as a National Estuary Program and eligible for annual federal funds, thereby founding the SMBRF’s unique, collaborative program.

Nahai is an environmental attorney, political activist, and former head of the LA DWP, where he increased the renewable energy portfolio to 14 percent. He has been a consistent and effective SMBRF supporter.

A member of the SMBRC Governing Board, Sen. Pavley has made the environment one of her key issues, including authoring landmark climate change laws AB 1493 and AB 32.

The first Urban Coast Environmental Hero Award will be presented at the event.

Signature dishes created for the 25th celebration will feature sustainable and locally caught Santa Monica Bay seafood, will be served, along with hors d’oeuvres and premium organic wine from Frey Vineyards.

The Host Committee is led by SMBRF President Laurie Newman, who staffed the original legislation when she worked for Kuehl.

Individual tickets options, ranging from $150-$500, are available at www.eventbee.com/v/smbrf25.