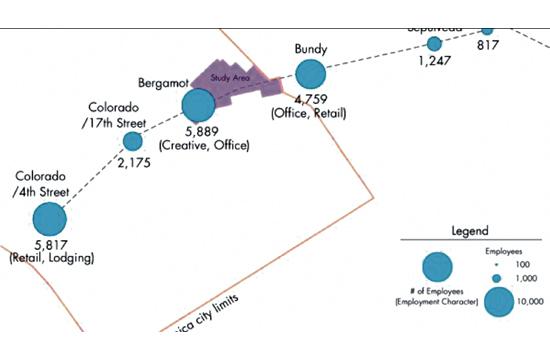 Not all development in Santa Monica is proposed to be a high-rise building by the beach or a mixed-use project in the downtown area. The City Council formally adopted Tuesday night the Bergamot Area Plan, which seeks to transform the almost geographic center of Santa Monica into a thriving district balancing the arts, commerce, and residence.

Council members voted 6 to 1 in favor of the plan, with council member Kevin McKeown the sole “no” vote.

The council’s vote was logged just before 2 am and less than 24 hours before the Planning Commission would weigh in on a proposed development agreement (DA) by Hines 26th Street LLC to bring a mixed-use commercial, creative, and residential project to the Bergamot Station area.

Yet, the focus of the discussion and public testimony was whether the Bergamot Area Plan, as a whole, was ready to move forward.

For about six hours Tuesday evening and into Wednesday morning, council members and members of the public deliberated the plan’s merits.

Some key concerns included the impacts a new neighborhood on local traffic, housing-jobs balance and the lack of affordable housing, open space, and whether construction might force some artists – a group the Bergamot Area Plan aims to accommodate – to seek space elsewhere.

There were also multiple requests for the council to obtain a new Environmental Impact Report (EIR). Some speakers did not believe the current EIR accurately reflected the traffic impacts both within and surrounding the Bergamot Area.

Sunset Park resident Ann Heller said she liked the plan overall but hoped council members would look at its traffic impacts in the Sunset Park neighborhood.

Zina Josephs echoed similar sentiments, pointing out the Friends of Sunset Park have regularly complained to City Hall and the council about traffic impacts from the Bergamot Area Plan.

“We ask you to downsize the Bergamot Area Plan and to do a new EIR that tells the truth about the traffic impacts,” Josephs told council members.

Speaking on behalf of the North of Montana Association, Landsberg said the plan as currently proposed would increase density, pollution, and traffic.

“We in the north of Montana neighborhood are concerned that the proposed plan will open the door to questionable methods for calculating density, allowing a developer unprecedented leeway in constructing hyper-dense development,” Landsberg told council members. “Many of us are concerned that streets and paths on the site can be counted as open space.”

Other speakers also asked council members to ensure sidewalks and streets are not considered as “open space.”

Another concern: how much traffic would be affected along Olympic Boulevard with the construction of Hines’ proposed project and Marc Luzzatto’s East Village plan at Village Trailer Park.

The Bergamot Area Plan, which is 230 pages in length, attempts to lay the groundwork for transforming about 142 acres into what City Hall hopes would be a sustainable neighborhood with a thriving arts community and residents who work within biking or walking distance.

The Expo Line is also a key element of the Bergamot Area Plan; one of the light rail’s stations is currently being built in the area and serves as the figurative hub of the Plan.

In addition to the concerns raised by speakers during the lengthy public testimony, a major sticking point on the dais was affordable housing.

However, other council members did not support the idea. Council member Gleam Davis, for one, worried such a requirement would have unintended consequence. Requiring too many affordable units, for example, might translate into developers no longer finding it lucrative to build in the Bergamot Area, which in turn could result in a dearth of housing development there.

Still, council members were open to discussing how housing could be made more affordable, as the Bergamot Area Plan’s key aim is to promote people moving in the neighborhood and be within walking or biking distance to where they work.

With the Bergamot Area Plan now in play, the council might soon be considering Hines’s DA request.

The proposed plan is 766,908 square feet in size and would be a “mixed-use creative office, neighborhood commercial, and residential project” in the heart of Bergamot Station and its Transit Village District.

According to the City staff report submitted to the Planning Commission for its Sept. 11 meeting, a deed-restriction could be placed on the development, requiring 75 of the 471 proposed units to be “affordable.”