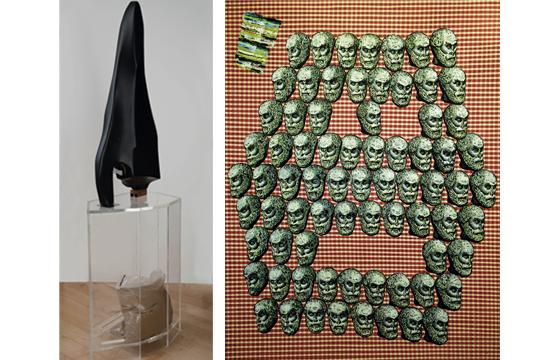 If you haven’t visited the Santa Monica Museum of Art lately, now is a great time to go with the opening of two new exhibitions today.

In Project Room 1 is Ara Dymond’s “Famous, New York, Modernism Everywhere” that will remain on display through Nov. 16, 2013. In Project Room 2 is Mathew Zefeldt’s “Forms Forming Forms” through Jan. 11, 2014.

Dymond’s exhibition presents a mixed media installation, in which sculpture and video function as allegorical actors in a theatrical setting that explores the critical tensions between art and life.

“Famous, New York, Modernism Everywhere” includes a series of similar sculptures made up, at first glance, of sweatshirts, Plexiglas pedestals, and a Persian rug.

The hooded sweatshirts are, in fact, ossified forms sculpted in resin and automotive filler, balanced precariously on their transparent bases.

Rather than providing unwavering support, the Plexiglas pedestals contain sandbags that emphasize the need for additional ballast.

Dymond’s Persian rug is an enlarged digital photograph, depicting the textile devoid of its texture.

Formally, these cryptic sculptural installations allude to the vocabulary of Modernist masters such as Hans Arp, Constantin Brancusi, Alberto Giacometti, and others. Stealing the logic of Surrealism and Dada, Dymond has transformed everyday objects and cast them against type.

The stage for the exhibit is further set by “Modernism Everywhere,” a durational video whose eight-hour running time coincides with the Santa Monica Museum of Art’s business hours.

Filmed primarily on the beach in Long Island, New York, Dymond superimposes the Atlantic coastline onto the Pacific.

Dymond’s exhibition plays out a duel between the real and the aesthetic, between space and place.

Dymond was born in 1978 in Hawaii and lives and works in New York City. He received his Bachelor of Fine Arts degree in Art History from the State University of New York at Purchase in 2001.

Meanwhile in Project Room 2, “Forms Forming Forms” is the first museum exhibition for Zefeldt, an emerging Bay Area painter who will create an immersive, optical installation at SMMoA, transforming the gallery walls into a hallucinatory backdrop for three of his monumental still lifes.

Fluorescent washes of color and intricate patterns of stripes, chevrons, and plaids provide the backdrops for the work.

Head-Face #4, as one example of Zefeldt’s jubilant exploration of paint, is part still life part portrait, set upon a dizzying gingham background.

Dozens of identical Classical busts, each painstakingly hand-painted, crudely outline a stick-figure face with gaping holes for its eyes and mouth.

Zefeldt describes his paintings as windows into fictional worlds.

With the steady hand of a masterful painter he plays with a reliance on simple forms reminiscent of Microsoft’s Paint, complete with pixel-induced shakiness and clip art-style copying and pasting.

The paintings and patterns in Forms Forming Forms call up the visual lexicon of early 1990s computer hackers, who created viruses and other self-reproducing computer programs, which used excess and obfuscation to distract as they wiped out memories. Using this just-outdated aesthetic as a Trojan horse, Zefeldt successfully invokes the digital age while ultimately emphasizing a love of paint.

His still lifes encompass all of paint’s visual tools from abstraction to figuration: at times he piles paint directly onto canvas to emphasize its literal, sculptural qualities, but he also paints narratives with illusionistic, 3D figures in two-dimensional planes.

In Zefeldt’s paintings, repetitive decorous patterns are transformed from the monotonous into the maniacal.

SMMoA is located at Bergamot Station, Building G1, 2525 Michigan Avenue, Santa Monica. It is open Tuesday through Saturday from 11 am to 6 pm, closed Sunday, Monday, and all legal holidays.

Suggested donation: $5; $3 for seniors and students.