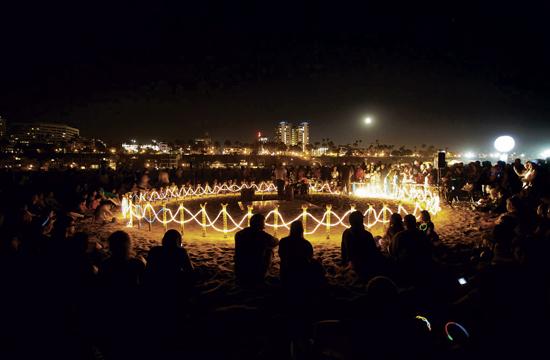 Santa Monica is preparing for an influx of more than 150,000 people next Saturday evening for the third iteration of “Glow” – a grand-scale event that will transform the Santa Monica Pier and surrounding area into an “outdoor museum.”

Hailed as Santa Monica’s “signature cultural event,” Glow takes place Sept. 28 and is a nighttime arts celebration highlighting original artwork. The art event begins at 7 pm and continues through 3 am the following morning.

If you are one of the estimated 150,000 people in attendance at Glow next week, what can you expect to see? According to organizers, Glow has commissioned 15 site-specific, interactive art projects to activate the pier area and is a veritable survey of contemporary art practices, ranging from large-scale earthworks to customized, participatory apps for mobile devices.

Considered one of the largest public art events in the world, the works featured at Glow are expected to fuse technology, creativity, and natural splendor.

Public and private financing is relied upon to fund the event’s $600,000 price tag.

“Glow grew out of community demand for a signature cultural event, one that would be specific to Santa Monica and that would draw international attention, enhancing the city’s reputation as a destination for cultural tourism and showcasing its vibrant creative sector,” City staff stated in a report to council members in June. “Each work of art will be created specifically for Glow and for the location in which the art is sited.”

Brand, for example, will be on the beach north of the pier creating a ring of fire and a sunken chamber just as the sun dips below the horizon. Later, sea creatures created by Koenig will respond to specific mobile phone applications at Palisades Park.

Glow is a free event and open to the public. Visit glowsantamonica.org for more information about the event, such as information of each exhibition and artist as well as where to park.

The radio station KCRW has created a soundscape for Glow and can be found at www.kcrw.com/glow. Also available on the station’s Glow-themed website are interviews between KCRW’s DJs and the event’s artists.

The first-ever Glow was in 2008. It was, according to organizers, “the first all-night arts event in the United States to emphasize the commissioning of new work, transforms Santa Monica into a world of interactive and engaging contemporary art installations.”

An estimated 250,000 people attended the inaugural event. The second Glow took place in 2010.

Glow was originally inspired by the Paris event, “Nuit Blanche.”