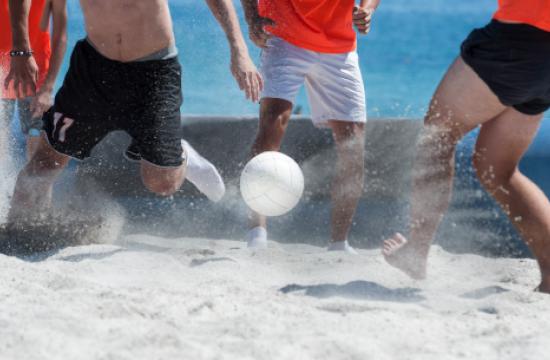 The organization can be described as a loose network of civic-minded people who come together as a community to raise money for various non-profit organizations through some sort of fitness activity.

Its next event will be this Saturday from 11 am to 3 pm where Ocean Park Boulevard meets the beach — The First Annual #FutbolClassico Beach Soccer Tournament.

Games will be four on four for 20 minutes with ties. Each player is guaranteed three games minimum in round robin tournament of 10 teams.

The cost to register a team of five or more players is $100 or be a free agent for $20 to be placed on a supportive team.

The Santa Monica Sports Club, founded in November 2012, was a product of Dirickson’s belief that sports and fitness possess the power to bring people together as a community.

“I started organizing friends for athletic events and then decided to bring friends together to raise money for non-profits,” Dirickson said. “It became a way for people to improve their health physically and improve the health of non-profits financially.”

The organization, which does not have a retail location, relies on the local businesses and corporations to donate space for scheduled events.

Dirickson encourages non-profit organizations seeking donations, to reach out to the club in order to request to coordinate a sporting event.

Although the organization is relatively new, The Santa Monica Sports Club has hosted several events that have raised up to $2500 for various non-profits.

In December 2012, Blake successfully ran a marathon on a treadmill at local bar and grill to raise money for Movember, which seeks to raise awareness of men’s health issues.

In May 2013, the organization held an event hosted by Yogahop in Santa Monica. Participants paid a $25 dollar donation in exchange for a one-hour yoga class.

In exchange for a $20 donation to the Westside Food Bank, participants received a one-hour Mixed Martial Arts class for self-defense at Robot Fight Fitness.

Dirickson hopes each of the events he has done this past year will become annual events in the future.

“The plan is to make every event a first annual one, so we can soon have recurring events,” he said. “I hope to build momentum slowly but surely.”

Dirickson is already gearing up for what he hopes to be the second annual treadmill marathon later this year.

Thus far, the events attract between 25 and 50 people. Dirickson hopes to grow the organization through word of mouth and social networking.

Although the majority of Dirickson’s members have been Santa Monica residents, he hopes that soon a wide range of people will participate.

“I hope this catches on because it’s all about having a good time with friends, being active, and giving back to the community,” he said.

The Santa Monica Sports Club’s non-profit partners and corporate sponsors are what allow the club to live its motto “No Dues, Just Benefits.”

The organizations non-profit partners include The Boys and Girls Club of Santa Monica, Movember, and Southern California and Nevada National MS Society.

For more information on The Santa Monica Sports Club and this Saturday’s event, visit santamonicasportsclub.com.