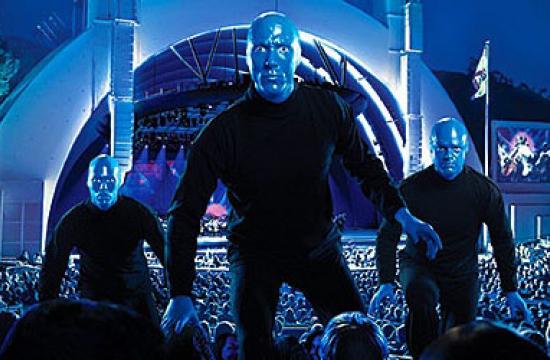 The luminescent-infused performance will be a colorful and interactive celebration of art and music as it takes guests on an indescribable journey that only Blue Man Group can offer in one of the world’s largest natural amphitheaters and most iconic performance venues.

The Hollywood Bowl will be utterly transformed, courtesy of cutting edge video mapping by Obscura Digital, into a fully-immersive Blue Man Group experience from the moment guests enter the space.

Combining their iconic style and unique instruments, the blue trio will be joined by the massive (more than 80-piece) Hollywood Bowl Orchestra in exhilarating new arrangements of their own signature melodies, as well as their singular take on some of the classical music world’s best-known pieces.

The show will also feature the debut of brand new instruments conceived and designed by the mad scientist minds of Blue Man Group.

During a special performance, Blue Man Group will be joined by the wildly popular and Grammy-nominated Brazilian band Monobloco.

As an extension of their recent collaboration at Carnival in Rio de Janeiro, Blue Man Group will transport patrons to the streets of the world-famous festival by combining their unique percussive instruments with Monobloco’s cultural-inspired sounds of samba-rock and funk.

The wild collaboration will propel audience members into an infectious musical celebration.

In classic Hollywood Bowl style, the evening will climax with a dazzling fireworks display, thrillingly underscored with a brand-new Blue Man Group composition.

Performances will be held at 8 pm both nights.