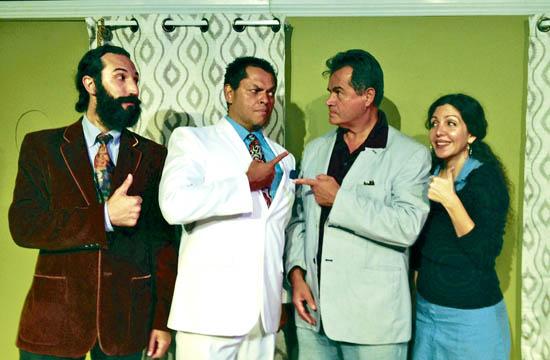 The Promenade Playhouse on the Third Street Promenade tonight presents the world premiere engagement of a new comedy “The New Situation.”

Performances will be held Fridays and Saturdays at 8 pm and Sundays (Sept. 8 and 15) at 5 pm through September 28..

Francisco and Antonia are middle-aged siblings who share a home in the mid-Wilshire district of L.A. They find themselves in a new situation, one brought about by the circumstances associated with a recessionary economy.

Francisco has been laid off from his teaching job. Antonia has neither worked nor left the house for a couple of years, traumatized as she’s been by a devastating personal loss.

To ease their financial woes, they decide to rent out a vacant room in their home.

The first two applicants couldn’t be any more different.

Connie is a retired gay man who volunteers as a docent at L.A. County Museum of Art.

He is still grieving from the death of his lover. Connie has much to offer: He is a gourmet chef and a great dancer.

Rudy is a straight man who is often on the prowl, frequently texting potential dates. He has been a maitre d’ for 30 years, but the restaurant business is rocky because of the economy. He, too, is a good dancer.

These four people are so different. Could they ever possibly live under the same roof? How could it ever work? Yet, might it be possible that the four of them together just might be what each of them needs?

He has also written for television (“The Facts of Life”) as well as Shakespeare adaptations and an upcoming feature film, “North of Hell,” starring Katherine Heigl and Patrick Wilson.

Also an actor, Allen worked with El Teatro Campesino, the Bilingual Foundation of the Arts, the Mark Taper Forum Improvisational Theater Project, in episodic television, feature films and as a voice-over artist for over 200 films and television shows. He is the recipient of an MFA from UC Berkeley.

The cast that Allen has assembled for “The New Situation” includes Joshua M. Bott, Susan M. Flynn, Jordan Preston, and himself.

Sometimes when you’re confronted with a new situation, you could use a few good laughs. The play “The New Situation” delivers them in quantity.

For reservations or more information, call 800.838.3006 or visit thenewsituation.brownpapertickets.com.