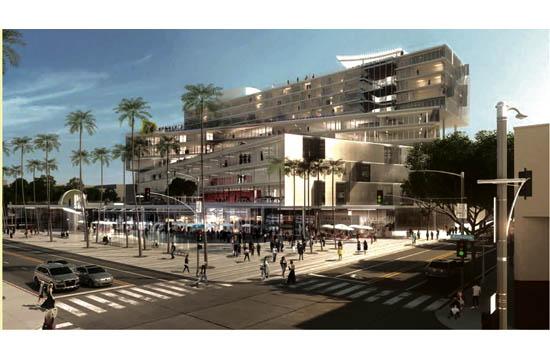 A project proposing to build almost 500,000 square feet of hotel, office, retail, and residential space in the heart of Santa Monica’s urban core at 4th and Arizona will have to wait a little while longer before seeing the light of day.

Council members last week voted down a proposal by Metropolitan Pacific Capital (MPC), believing the project as currently designed still had some lingering issues that needed to be addressed.

MPC pitched a 12-story development – labeled as “The Plaza at Santa Monica” – on a 2.5-acre lot owned by City Hall.

Rem Koolhaas is the lead architect for the design of this public/private project.

A “special purpose entity” would be designated to manage the open space, according to City staff. The entity, City staff stated, would “ensure active year-round programming, including a seasonal ice skating rink.”

According to City staff, MPC’s proposal carried a price tag of $331.3 million with annual ground lease payments of $1.3 million. The estimated budget for open space management would reach $860,000 annually within four years of the project’s opening, City staff estimated.

In a 5 to 1 vote last week, council members decided to postpone a final decision on the proposed project, giving MPC and its partners a chance to address a handful of concerns raised during the Aug. 27 meeting.

Also given a chance to rehash its proposal was Related California, another developer who submitted a bid but was not selected by City staff to enter into exclusive negotiations.

All three developers – Forest City Development, MPC, and Related California – submitted proposals earlier this year to build on the City-owned property at Fourth and Arizona. City staff proposed to council members that they should enter into exclusive negotiations with MPC.

The lack of housing in MPC’s proposal was a primary concern for council members, as, under the plans presented Aug. 27, the developer had no more than an option to develop 85,511 square feet – less than 20 percent of the 448,182 square feet of proposed building space – for residential purposes. That same space could also be built as office space at the developer’s discretion.

Beyond the yearning for more housing, council members also pondered how the public would access the proposed open space.

Also up for discussion was the level of control City Hall would have in selecting the retailers who would fill in the estimated 40,000 square feet of retail space.

Council member Bob Holbrook cast the sole nay vote. Similar to his position in the Village Trailer Park vote, Holbrook stated he felt MPC had already gone through an arduous and competitive process to get to this point and therefore should be allowed to move forward.

According to information made available on the City’s website, Related California proposed 846 public parking spaces, 20 percent of residential units available for very low income households, “iconic architecture,” a public gallery space and a rooftop bar, and a financial benefit of $102.3 million for City Hall. The total proposed project size was 484,039 square feet in building space and 39,735 square feet for public open space.