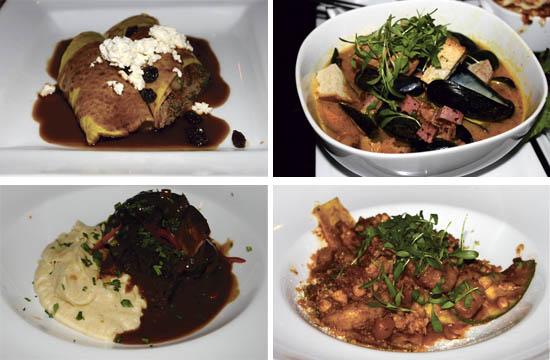 For the past two years, Upper West has been creating a name for itself as a hangout for locals seeking fresh, creative cuisine in the City’s southeastern corner at 3321 Pico Boulevard.

Executive chef Nick Shipp said he and his partners at the restaurant all agree locals have been the key to the restaurant’s success as its location is away from the tourist hubs of the Santa Monica Pier and Third Street Promenade.

“We wanted to be a neighborhood place kind of like the Cheers in this corner of Santa Monica,” Shipp said. “Luckily for us it’s worked out that way.”

He said the concept was to attract a local crowd that would visit the restaurant one, two, three times a week opposed to once a month or once every couple of months.

“There’s a lot of simplicity in our menu,” Shipp said. “It’s not refined, but just outside the box enough to be interesting. We change the menu a lot as we are a farm-to-table restaurant and we are as sustainable as possible.”

While the restaurant serves up modern American cuisine, Shipp said he brings a “one world global fusion” style of cooking to his dishes.

“We serve true American cuisine,” he said. “I think a lot of times people lump in American cuisine as it’s got a hamburger and mac and cheese, it must be American food or a gastro pub, which is not the case. America is built on cultures from all over the world. All you have to do is drive through LA and you will find amazing cuisine like Japanese, Italian, Jamaican, and a whole Ethiopian section of town. I can get almost anything I want from any culture.”

With this approach to cooking, Shipp said he puts together ingredients that are rarely paired together.

“We have savory lamb crepes on the menu that have curry in it, mixing influences of French and Indian cuisine,” he said. “It almost doesn’t make sense, but the flavors end up working out.”

Raziel said the restaurant carries 12 draft beers on tap – never any by the bottle – that are mostly craft beers.

“We have six beers on draft that have been here since we opened like the Allagash Curieux which is a Belgian triple aged that’s been aged in Jim Beam barrels, and we have the Unibroue wheat ale, and we also have Stella Artois,” Raziel said. “Then we have six rotating handles that we change. Right now we have an IPA that’s aged on oak, so it gives it a little bit of vanilla and caramel flavor. We also feature seasonal beers, so we have a couple of summer time beers at the moment.”

A beer tasting flight is also available where guests can choose any four beers (of five ounces each) for $12.

A bourbon tasting flight is also available for $20 where guests can select four bourbons that are 3/4 of an ounce in size.

Raziel said the restaurant has about 10 specialty cocktails that he changes from time to time.

He said the restaurant has two signature cocktails that have been on the menu since day one.

“Our honey rye cocktail is a rye based cocktail that’s a little similar to a Manhattan with rye and a little bit of honey liquor served over a big ice cube,” he said. “The other is a Cucumber martini that can be made with either Bombay gin or Skyy vodka that’s got cucumber and a little bit of mint in it.”

Raziel said the restaurant also serves about 30 wines by the glass – nine white and 21 red wines.

Happy hour is available seven days a week from 5-7 pm with select $4 glasses of wine, select $4/$6 draft beers, and select bar food such as chicken wings and a hamburger.

Weekly specials include all night happy hour on Mondays and half off all bottles of wine on Tuesdays.

Raziel said the restaurant also does a monthly five-course dinner pairing with spirits, wine, or beer.

He said brewmasters, wine makers, and brand ambassadors from whisky and bourbon companies speak about their product as it is served alongside each of the dishes.

Upper West is open for lunch Monday through Friday from 11:30 am to 3 pm and dinner seven nights a week from 5 pm.