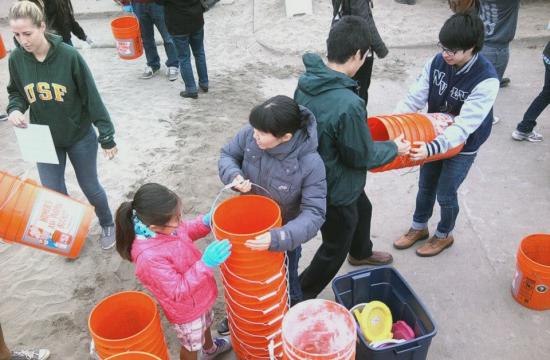 Tens of thousands of volunteers will converge on California’s beaches today with a mission: hauling away the tons of trash that have accumulated there, marring the scenic sands and craggy rocks that make the state a world-renowned attraction.

The 28th Annual Beach Cleanup is sponsored by the California Coastal Commission. In addition to cleaning up the beaches, the event focuses attention on the serious problem of trash entering the waterways of the state.

“Beach cleanups have had an enormous impact on the quality of California’s coasts, not only for the trash they remove, but for the statement they have made to politicians and policymakers about how much the public cares about their coast,” said Felicia Marcus, chair of the State Water Resources Control Board.

“The cleanups played a catalytic role in the ’80s when they transformed the local dialogue on environmental issues, and that they continue is a testament to how precious a resource the coasts are and how determined the public is to keep this issue front and center,” Marcus added.

Moore notes that the cleanups are important events, not only to remove the eyesore of trash from beaches, but to make the public aware of the problem trash poses to all of California’s waterways.

The State Water Board is developing a statewide trash policy to prevent debris from entering the water in the first place.

The State Water Board’s five members will be out participating in the Beach Cleanup event Saturday, including member Steven Moore.

The accumulation of plastic in the ocean is a significant environmental challenge, Moore said.

“To really address the accumulation of plastic debris, we have to rethink two major issues. One is how we design urban drainage. The trash policy focuses on that, how we can cost-effectively modify urban drainage to prevent trash and other pollution. The second is how we formulate packaging for single use application,” he said.

“Coastal cleanups and river cleanups are important, and they get people thinking about the problem. It’s visible, it’s something we all see and the public can understand,” Moore added. But the cleanups and litter laws haven’t solved the problem.

“There is a consistent and staggering amount of plastic debris getting into the ocean, most of it in the last forty years,” Moore said. “For future generations we need to think of ways to formulate packaging and products so that they don’t persist in the ocean. Part of what we can do is redesign drainage so it doesn’t act as a conduit for trash to get into the waterways.”