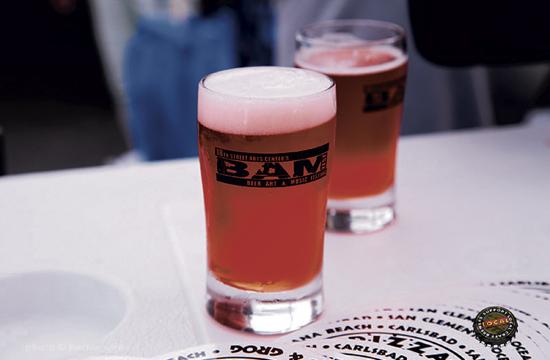 BAM Fest celebrates the best of locally produced art and music in conjunction with a variety of craft beers.

With more than 40 craft breweries, four bands, open galleries, and gourmet food trucks, BAM Fest is well equipped to draw record-breaking crowds in its fourth year as one of the LA’s most anticipated cultural celebrations.

BAM Fest attendees will spend the afternoon sipping in the sun, interacting with artists, and exploring significant artworks while listening to groovy tunes.

But what really makes this event special for its guests is that they know that all proceeds benefit 18th Street Arts Center, a 25-year-old, influential non-profit arts organization in Santa Monica. It is a culturally infused event that benefits a great cause.

Participating breweries have been carefully selected by the team and represent the best of the craft beer industry.

The breweries range from big to small, including the popular and widely known Sierra Nevada Brewing and Stone Brewing Companies to newly launched breweries like Los Angeles Ale Works who got their start through a recent Kickstarter campaign.

The diverse craft beer offerings at 18th Street’s BAM Fest present a range of styles for your tasting enjoyment.

For the beer connoisseur, this year’s BAM Fest is showcasing limited release seasonal beers on tap, such as Samuel Adam’s Fat Jack Double Pumpkin, hoppy treats from The Brewery at Abigaile, and unique and uncommon brews from The Dudes’ Brewing Company.

A special bonus for BAM Fest attendees will be the opportunity to participate in 20-minute mini-educational sessions called Crash Courses that will cover everything from beer and food pairing to how to make homebrew.

For those who prefer fermented grapes to hops there will also be an area to sample some of Southern California’s finest wines as well as home brewed sodas by Pacific Gravity Home Brewers Club.

The music lined up for BAM Fest is just as diverse as the beer samples.

From the Latin infused rhythmic sounds of “KoTolàn” whose songs, celebrating cultural diversity, are sung in Japanese, Spanish, and English to the dance-inducing soulful funk of “Cory Phillips and the Groove Orchestra,” the featured music at 18th Street’s festival is sure to make attendees move.

Brandishing some lyrical weaponry with a unique style, Ben Bateman and his pop trio create upbeat tunes rooted in rock and folk that pulsate with energy, and Artist/DJ Ofunne One Soul fuses an array of musical styles between sets that always gets the crowd jammin’.

Incorporating film, video, and photographic installations, Julià embarks on a new project that focuses on the relationship between the camera and the bodies that operate it, such as cinematographers.

Delving into the layers of translation between the moving image, industrial design, and ergonomics, Julià’s work analyzes the structure and function of commercially produced cameras and the biochemical systems of the body.

In addition, the resident artists who create daily at 18th Street Arts Center open their studios for attendees to experience works in progress. Current artists and art organizations whose studios will be open include Cheryl Walker, Yvette Gellis, California Lawyers for the Arts, Highways Performance Space, and EZTV.