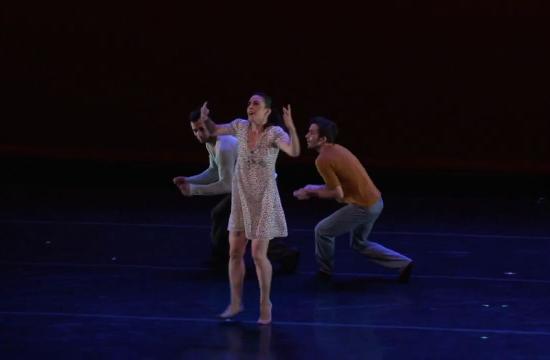 Bodytraffic, the dance company that lives and thrives in Los Angeles while recruiting talent from around the globe, presents two evenings of vibrant and innovative dance at The Broad Stage in Santa Monica tonight and Saturday.

The event includes the first performance of “Kollide” – created for Bodytraffic by New York-based Kyle Abraham; a chance to see “And at Midnight, the Green Bride Floated Through the Village Square…” by Barak Marshall; and one of Bodytraffic’s signature pieces, “o2Joy” by Richard Siegal.

Kyle Abraham, recently named a MacArthur Fellow, is one of the most ground-breaking and sought-after choreographers of the last five years and continues to win awards and accolades for his unforgettable performances and urban style.

Award-winning choreographer Barak Marshall has established himself as one of Israel’s most innovative voices.

“And at Midnight …” is an original piece based in part on a true story about a family in the 40s who were neighbors of his mother in Yemen. The performance features a cameo role for his mother, acclaimed dancer-choreographer Margalit Oved.

Richard Siegal is acknowledged the world over as a specialist in cross media performances. “o2Joy” celebrates great American jazz music through the sheer love of dance.

Bodytraffic’s growing body of work has cemented them firmly as one of top dance companies in the country.

Dance Magazine named them “Top 25 to Watch” in 2013. The company comes home after sold-out performances at key engagements at Jacob’s Pillow in Massachusetts and the Fall for Dance Festival at New York City Center.

Dale Franzen, Director of The Broad Stage, said the performance was highly anticipated after Bodytraffic’s recent performances that have won accolades in the world of dance.

“Bodytraffic is one of the most talked about companies in dance today … not just in Los Angeles but worldwide,” Franzen said. “Their performances are always amazing in collaboration, style, and message.”

In launching Bodytraffic, founders Lillian Barbeito and Tina Finkelman Berkett ignored advice about what they “must” do and developed a plan for their dream company: Part of the dream was to be both performers and co-directors, to have an exclusive repertory commissioned from prestigious, international choreographers, and to employ great dancers that would work together as a family.

“Our fantasy of having a thriving contemporary dance company based in LA is coming to fruition,” said Lillian Barbeito. “Bodytraffic’s recent success on the international dance scene is absolutely thrilling. However, nothing feels better than dancing for the people in our hometown. Being at The Broad Stage is the ultimate fulfillment because it means having support and recognition from a glorious venue in our very own stomping grounds.”