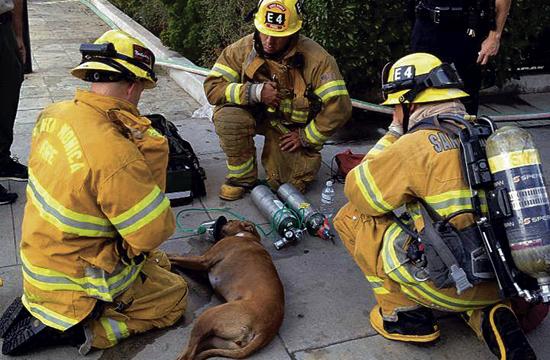 Boxer Rescue Los Angeles will this weekend honor the heroes from the Santa Monica Fire Department who rescued Stella, the Boxer mix, from a burning building in Santa Monica in September.

Stella, her owner Juwan and the heroes from SMFD will be honored at the Woof & Wine fundraising event at the Automobile Driving Museum in El Segundo from 7-10 pm.

SMFD firefighters arrived at a well-involved structure in the 2600 block of 2nd Street in Santa Monica at about 7:30 am on Saturday, Sept. 14.

The firefighters discovered Stella had hidden behind a mattress as they searched the five-unit structure for victims.

The firefighters rushed Stella from the burning building and immediately began to revive her using an oxygen mask specially designed for dogs and cats. Stella soon regained consciousness and was taken to an animal hospital.

The Woof & Wine event is co-hosted by Santa Monica’s very own Lynne Thomas, Director of Sales & Marketing at The Lobster restaurant.