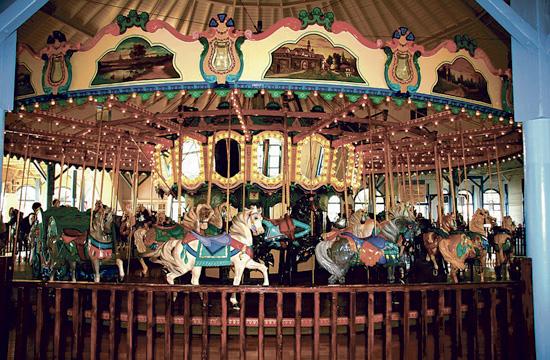 Operating a 91-year-old carousel is not cheap. The Santa Monica Pier Carousel, for example, is expected to cost California-based Roth Management as much as $489,413 to operate within a two-year span, courtesy of a contract approved Oct. 22 by the City Council.

Roth Management has operated the Pier Carousel on behalf of City Hall since 2001; its current agreement with Santa Monica experiences Feb. 1, 2014. During the consent calendar portion of its Oct. 22 meeting, council members unanimously approved a two-year deal with the possibility of three one-year renewals for Roth Management to continue its maintenance and operation of one of the Pier’s most iconic symbols.

“The management fee and reimbursement to the contractor for staff salaries and related expenses would not exceed $241,090 for the first year and $248,322 for the second year, for a total not to exceed $489,413,” City staff stated.

City staff added the three one-year renewal options would be “subject to an annual increase based on the Consumer Price Index” and “operating expenses for each renewal year would be increased by the annual Living Wage adjustment.”

In its tenth decade of operation, the Pier Carousel was built by Philadelphia Toboggan Co. in 1922. Housed within the Looff Hippodrome, the Pier Carousel is a designated National Historic Landmark and was purchased by City Hall in 1977.

Since 1977, the City contracted with specialized vendors to tend to the day-to-day operation, maintenance, repair, and restoration of the carousel.

“The carousel operator is required to manage all aspects of the carousel’s day to day operation including providing trained employees, maintaining safety records and permits, and depositing ticket revenue with the City,” City staff stated. “In addition the operator is required to perform specialized services relating to paint restoration, carving repair of damaged pieces, and performing inspections, basic repairs and preventative maintenance of the carousel mechanism.”

City Hall put out a Request for Proposal in May. Roth Management was the only vendor to submit a proposal, according to City staff.

While Roth Management has maintained and managed the Pier Carousel since 2001, it has also restored the 1924 Dentzel carousel located in the Please Touch Museum in Philadelphia, and the B&B Carousel on Coney Island.

According to City staff, Roth Management has maintained and managed the Pier Carousel “in an excellent manner.”

The Pier Carousel generates an average of $181,000 in annual ticket revenues for Santa Monica, according to City staff, which helps “partially offset annual operating costs.”

The contract modification adds $809,316 to a contract previously worth $7,223,512 “for the purchase of fareboxes and associated hardware and software.”

“As part of the original contract, LECIP was to ensure that the fareboxes could accept the regional TAP card (EZ Pass) offered by the Los Angeles County Metropolitan Transportation Authority (Metro),” City staff stated. “Since award of the contract, Metro has proposed to provide and fund the installation of stand-alone validators to read Metro TAP cards.”

By approving the contract modification as part of its consent calendar Oct. 22, City staff stated the additional funding to the original contract “would enable the purchase of additional hardware such as hand-held point of sale devices, improved wireless LAN routers, a Smartcard printer, as well as single-use magnetic swipe cards and special employee Smartcards.”