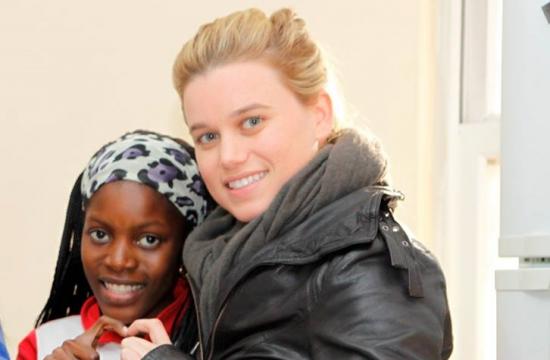 Los Angeles County Coroner’s Assistant Chief Ed Winter confirmed to The Mirror Friday morning the identity of one of the four victims aboard the fatal Santa Monica Airport accident on Sunday night.

“We’ve positively identified Lauren Winkler, she’s 28 years old from Irvine, California,” Winter told The Mirror. “The others are pending. Hopefully we’ll be able to have something later today.”

Condolences continue to flow to the tight-knit family of Morley Builders following the loss of its CEO Mark Benjamin and his son Luke who are believed to be two of the people in the fatal plane accident. A fourth female body has also yet to be officially identified.

According to Winkler’s employer’s website businessghost.com, she was Luke’s girlfriend.

The website she was a fundraiser and executive for an organization called Save A Child’s Heart, which provided free open-heart surgery in Israeli hospitals for children from Africa and the Middle East.

“Lauren had been traveling to Idaho for the weekend with her boyfriend, his father, and another woman,” the website said. “Her boyfriend’s father, a business owner and an accomplished pilot, had been at the controls, when The Citation II suddenly skidded off the runway after landing and crashed into a hangar, which collapsed on the jet, causing an instantaneous fireball that immediately killed all passengers. Since flight manifests for private aircraft do not require the names of the passengers, Lauren’s father Gary and her mother Carole remained in an agonizing limbo state for hours, and then two whole days, while the coroner’s office matched dental records with the bodies removed from the jet.”

At Save A Child’s Heart, the website said Winkler oversaw the fundraising, arranged more than 3,000 visits to the Wolfson Medical Center and the SACH House in Holon, and coordinated the volunteers and interns in the program.

“Lauren’s death reminds us, as the Talmud also tells us, that our days are numbered and we don’t know how long we’ll be here. But while we’re here, we’re meant to love and serve one another,” the website said.

Winter told The Mirror the identities of the other three people were pending positive identification via dental records. He said the bodies of two cats and a dog were also recovered.

It is still unclear whether Mark Benjamin, a registered private pilot, was the pilot of the flight.

The roof of the hanger then collapsed onto the plane.

Two cranes were used earlier this week to lift the wreckage of the hangar that collapsed onto the luxury business jet after it crashed into the structure and burst into flames.