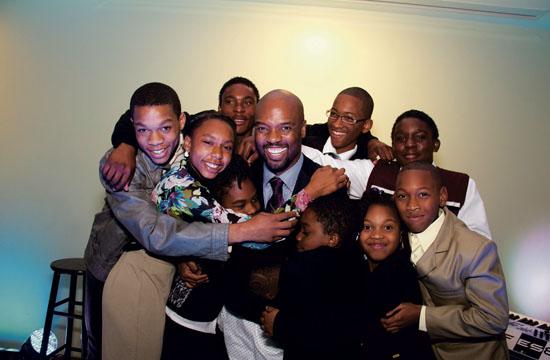 It started with a pair of sticks.

At nine years old Dana Hammond, growing up in Inglewood, could barely pay for the bus to go to school. His mother was a functional addict, and he wound up in the foster care system. Then his gift as a drummer was noticed and he was playing in church before a thousand people. He was paid a hundred dollars a week.

“I had this talent, and used the money to help provide for my family, catch the bus to school,” Hammond said. “Having to be an adult at a very young age, that hardship at home, built my character. And music taught me to open a bank account and learn about business. Without the music, I would have been a statistic.”

Opportunities opened up for the young prodigy: a trip with his gospel choir to New York, and then, at age 15, to Oslo, Norway, to be part of a workshop on Christian music.

He realized he had an opportunity to grow beyond the struggles of his community, and make something of himself.

He next learned to play piano from “a jazz pianist who was amazing.”

“I still remember the song that he taught me, which was Stella By Starlight,” Hammond said.

And he kept going, onto a professional career playing for various TV shows, and working with well-known musical artists such as Jessica Simpson, Trey Songz, the boy band Mindless Behavior, and Mary Mary.

Realizing his own good fortune was the result of talent meeting opportunity, something very rare for most kids like him, Hammond’s idea for Choice Group Inc. was born.

“I was able to put my life into a business model: a music and arts education program to help kids make better life choices,” Hammond said.

First through Capacity Build LA, and then learning management through Annenberg Foundation’s Alchemy+program, he developed the tools to bring his ideas to life.

A five-week pilot program was then begun with the help of The West Angeles Community Development Corporation. Classes are now held in a recreation hall in an underserved housing complex in Baldwin Village, and also at the Willows Community School in Culver City. Four programs are now offered, once a week: Music Production, Game Design, Percussion, and 2-D Design.

The program’s reputation has grown in stature in just the six years of its current existence, and plans are underway to expand to the West Side.

The New Roads School in Santa Monica is one of many schools considering implementation of the program for either after school enrichment or as part of the regular school day curriculum. The independent westside schools would actually pay for these high-end programs, with a portion benefiting the free programs already in place for at risk and foster youth.

With an eye to expand the programs beyond their current once-a-week format, and to include more kids and resources, the fundraiser taking place at Santa Monica’s Annenberg Community Beach House offers an opportunity to push the program above and beyond its current model.

“Dream Big,” subtitled, “Raise More, To Do More,” is the second annual fundraising event for Choice Group Inc., with a goal of $50,000, and a longer range goal for a $10 million dollar endowment, and a new school facility specifically built for the program.

Also on the guest list: L.A. Mayor Eric Garcetti, and real estate developer and child and healthcare advocate Rick Caruso. They come, because they believe in Hammond’s vision.

Highlighting that success, musical performances and art exhibitions, created during the 16-week program, will be showcased by the students, including a performance of the song, “Dream Big.”

The song itself was created with the help of songwriter Joi Starr (collaborator with Kayne West, Chris Brown and Brandi, among others).

Hammond and Choice Group Inc. hope that everyone can share and expand the dream, and the public is invited to attend Dream Big, which will be held at The Annenberg Community Beach House at 415 Pacific Coast Highway, Santa Monica on Oct. 24, 2013, beginning at 6:30 pm. Sponsorship opportunities are still available.

To support the event or purchase tickets, visit http://bit.ly/1apQEiZ or, for more information about Choice Group Inc. and their programs, visit choicegroupinc.org.