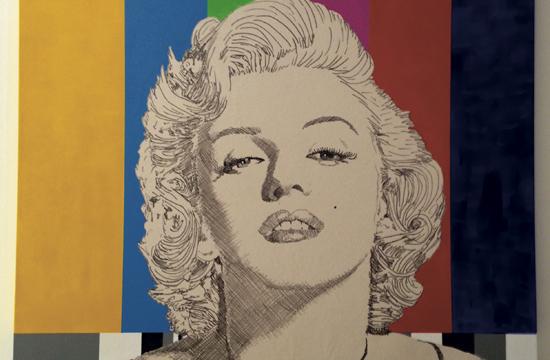 “Say What?” is the title of a new exhibition opening at the Jeanie Madsen Gallery this Saturday. Featuring three artists from three different countries, the exhibit will examine the voice of urban pop from various parts of the world. Curated by Jeanie Madsen, the three-person show spotlights each artist’s take on the urban slang title.

Madsen hails from the fashion world and still actively works in both genres. Curating an art show is much like design: both involve the organization of a project with both color and texture. Madsen will in fact host a fashion show on Oct. 19, which will feature her creations.

“Each piece I make is like a painting,” Madsen says.

As a curator, Madsen admits she finds herself looking for that same one of a kind perspective from each artist.

When asked what inspired her to put the three artists together she replies, “Their genre… their style is hip and fresh… they all complement each other.”

Dillon is a Los Angeles born street artist. His art can be seen all over the city. Perhaps his most memorable work, which has remained up for the past five months, is prominently displayed on the101 freeway.

In addition to leaving his mark around town, he sells to private collectors.

At gallery shows he admits he’s enjoyed some interesting reactions from his street art side of life.

“I had a show a few months ago and a woman was just staring intently at one of my pieces,” says Dillon. “She told me she drove the freeway to work everyday and had seen the street version of that particular piece so often, she felt a bond with it… connected to it somehow. That is the power of images.”

As part of the upcoming show, Dillon will feature a mix of several series.

Several portrait and sketch series will be included. His fascination with guns comes into play as he combines targets from the shooting range (that the artist personally shot) with portraits of Hollywood icons.

He has dubbed this series “Beautiful Destruction.”

“I see myself today as a pop culture mediator…not just an artist…a neutral third party who attempts to assist people involved in better understanding their pop culture disagreements,” Romeo says.

Jennifer Verge relocated to Los Angeles from Canada seven years ago. She creates her art from found objects such as wood, nails, chains and more.

“I walked into the Gallery and she thought I was a New Yorker,” Verge says. “We instantly connected and have been friends ever since.”

The opening reception will take place on Saturday, Oct. 5 from 7-9 pm at the Jeanie Madsen Galley located at 1431 Ocean Avenue, Santa Monica. The show will remain on view through Oct. 30.