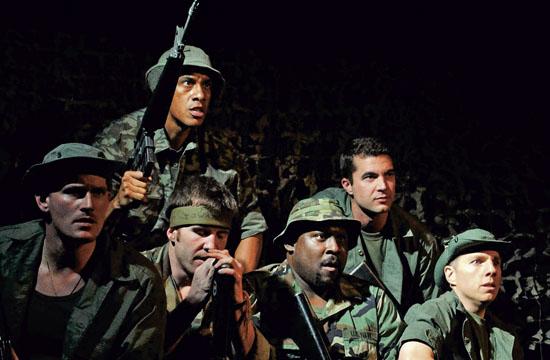 When John DiFusco returned from his tour of duty in Vietnam, the war may have eventually ended, but the psychological, nightmarish ramifications were cemented into his psyche, along with other veterans of this unpopular war.

Perhaps as a way to find some closure for himself and his fellow vets, many of whom were suffering from PTSD, DiFusco had this idea of developing a theatre piece and rounded up other vets who could share their experiences with each other through a series of psychodrama workshops.

Under his guidance, each participant contributed his own personal horror story and what eventually emerged was the groundbreaking “Tracers,” which was honed into a riveting, heartbreaking journey into the taste and smell of war as seen through their young eyes.  Under DiFusco’s guidance, the play made its world premiere at the Odyssey Theatre in 1980 and eventually was listed as one of the Ten Best Plays of 1984/1985.

This critic was there and experienced an incredibly moving, compelling, unforgettable theatrical experience.

Now, through a partnership between The Rogue Machine and the United States Veterans’ Artists Alliance, a revival of “Tracers” can be seen at the USAVAA Theater in Culver City and is as fresh and powerful as it was over 30 years ago, eliciting the same emotional response to the material.

Under DiFusco’s sharp direction, an extraordinary ensemble of gifted vet/actors takes us through a series of scenes woven together through music, movement, and rituals, each depicting a unique story as told through each of the actors.

The “grunts” are to go through 18-weeks of basic training by Drill Sgt. Williams, played by Terrence W. Edwards, who puts them through a series of demanding and demeaning tasks.

We burrow deep into the minds of each of the recruits who the Drill Sgt. refers to as maggots.  He does everything he can to prepare them for war by stripping them of their present code of conduct knowing full well that some of them will never return home.

With music of the era playing in the background, each of the scenes reveals another aspect of the war – deafening firefights during an ambush, killing for the first time, unlivable rat–infested bunkers, boredom overcome by smoking a joint or shooting up, juggling grenades for fun, dancing with each other to let off steam, and an abstract reenactment of putting invisible dead soldiers into body bags, illuminating the hardness that is slowly seeping in, making them more and more distant from the outside world.

There are a number of riveting monologues in which the actors break the fourth wall and talk directly to the audience about their hopes, fears, and observations.

While all the monologues are outstanding, Sgt. Williams gives a particularly poignant one during which he softens his tone confessing that these young men are not being trained properly for combat and that only 20 percent are really warriors, while the other 80 percent are targets.

*Tracers are bullets that have a bright glow illuminating bullets being fired and are usually loaded as every fifth round in machine gun belts.