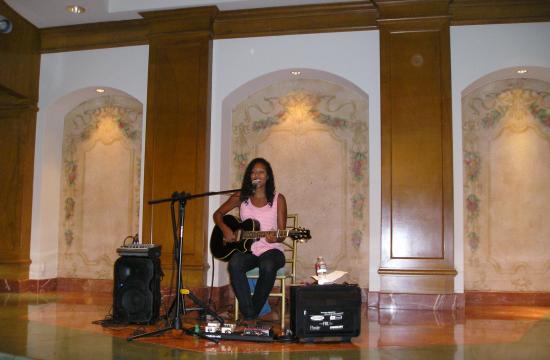 On a sunny Tuesday afternoon at the Santa Monica Third Street Promenade, a small crowd of strangers has gathered in a shared attitude of unexpected delight as they listen to a lovely young singer named Lakin.

Folks on their way to stores, restaurants or movies have put their plans aside to bask in the glow of a woman who is able to connect with total strangers through the sheer force of her artistry and charm.

Never mind the skateboarding teens, barking dogs, chatty tourists, or local loonies who may waltz before her sidewalk stage – the crowd is with her, and all distractions fade away.

I’ve had the joy of watching Lakin many times over the last couple of years, not just solo at the Promenade, but also at clubs with a full band.

I’m honored to call her a friend. Lakin is both one of the coolest chicks and the warmest woman I know. She is the rare artist who is (almost) completely sane. I’ve told her that if she ever gets bored with music, she could be a Senator or a CEO, and I’m only half kidding. A serious Christian, she would certainly make a great preacher. You should hear her gospel songs.

Occasionally, she’ll perform one of her gospel songs on the Promenade, winning over even the ubersecular, if not downright hedonistic, Santa Monica crowd. When I suggest to her she could make good money in the contemporary gospel field, Lakin carefully informs me that whatever money she would make in religious recordings she would donate to charity. She’s even thinking of starting her own nonprofit to aid third world children. “My secular music is all about connecting with people; my gospel songs are my attempt to connect with God.” In a town full of painted glass aspiring to be cubic zirconia, Lakin is the Hope Diamond.

Lakin even has the temerity to come from a happy family, with a lovely school teacher (and part time backup singer) mom and a dad who has been a successful percussionist with George Benson, Stevie Wonder and others; and is now a sports psychologist as well.

Lakin herself was a scrappy 5’6” basketball walk on for Long Beach State a few years ago, while earning her degree in jazz studies.

Lakin delivers crowd pleasing covers like “Let’s Stay Together”, “Put Your Records On”, “Meet Virginia” and a tender and touching “When You Wish Upon Star”, but it’s her own compositions that confirm her true gifts. A melodic mélange of pop, jazz, folk, R&B and an occasional touch of country, her songs feature lyrics as intelligent and heartfelt as the woman herself atop often harmonically complex, yet always accessible tunes.

Songs like “Unsure”, “Love Is Gravity”, “The World In Its Song”, “Shooting Stars”, “I Choose You”, “Kiss Me Goodbye” and a couple of dozen other gems waft through the afternoon haze with a genuinely touching purity. It’s a rare joy to see any master this close in the throes of creation.

Lakin is a perfectionist, so it’s not surprising that her self-produced CD “If Night Turns to Daylight” features over 20 top musicians and the strings from the Prague Philharmonic. It’s also a beautifully packaged product, and oh yeah, the songs are all great too.

The Promenade boasts a number of other talented musical regulars including two other great young female singer songwriters: the reggaeish veteran of “The Voice” Naia Kete and the ever delightful country folk queen Chelsea Williams. Yet, as popular and talented as they are even Naia and Chelsea can’t quite manage to turn the boisterous Promenade into an intimate and elegant nightclub like Lakin can.

Seeing her in actual clubs with a large band including horns and strings is where the full richness and complexity of her arrangements can truly flower. Though Lakin has played large venues opening for Cheryl Crow, Gladys Knight, Colbie Caillat and Sheila E., the way the L.A. club scene works, it’s often more profitable to play on the streets. Of course, these days the entire music industry is in a state of flux with no one quite sure in the post record store, post MTV, post dominant radio; reality shows, downloads and You Tube world, if even signing a record deal itself is still the answer.

Lakin has told me she wants a deal, but only if it’s the right one for her. I’ve told her the things working against her in the music business are her ethics, morality, thoughtfulness, and decency. Let’s hope her talent, charisma, beauty and charm can cancel out these negatives.

Meanwhile, back on the Promenade, a few dozen strangers unite in cheers to support a young woman only a few had ever seen before. Some offer favorable comparisons to Sade, Tracy Chapman, Meshell Ndegeocello, Corinne Bailey Rae, India Arie, and singers of another era like Roberta Flack, Minnie Ripperton and Joan Armatrading. There are occasional elements of accuracy in all, but in the end Lakin is Lakin. Still developing, still getting better. Hey, she’s only in her 20s.

After seeing me talk with her, a middle-aged man said to me “I’ve been a recording engineer for 30 years – why isn’t she a superstar?” I shrugged and told him he’s asking the wrong guy. Then I closed my eyes and listened to Lakin holding the afternoon rush spellbound with a wispy ballad called “This Road” and realized she already is.