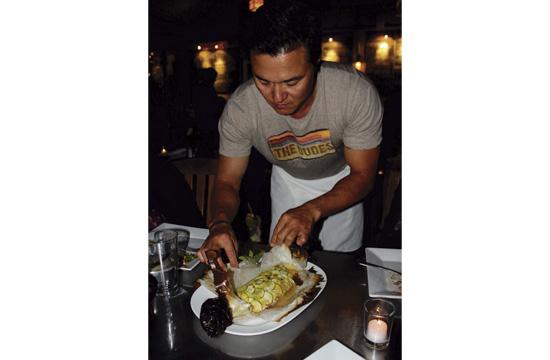 On a recent trip to Catalina Island, Library Ale House partner-chef Tom Hugenberger caught some fresh fish but didn’t have anything to cook with except some foil, a grill, and some charcoal.

He said he was able to pull off a tasty dish by wrapping it and letting it cook by the way of steam, which he said inspired one of his new fish dishes on his new menu.

“With that dish, it has vegetables (cabbage, onions, fennel, celery, bell peppers, and a little bit of cilantro) on the base,  it’s marinated with a little bit of rice wine vinegar, ginger, shallots, and some Thai chilies, and some fresh lime,” Hugenberger said. “That same marinade is used to create the sauce. To create the look of scales, I place thin sliced squash and layer it on top of the sole so it looks like scales on the fish.”

He said he wraps the fish and vegetables in parchment paper and cooks it in the oven for about 10 minutes.

“It’s the simplest thing to do,” Hugenberger said. “You can’t overcook it because it steams in its own little package.”

Library Ale House has been a Main Street mainstay for 18 years, but recently changed hands to Hugenberer’s restaurant group (which includes a diner in Culver City and a home style steakhouse in Fullerton) about 18 months ago.

He said he set out to reinvent the menu with affordable seasonal comfort food.

A new addition is the Vegetable Curry served inside a baby pumpkin with a side of basmati rice.

“We have the roasted pumpkin with aromatics inside and a little bit of white wine and it softens it up,” he said. “The curry probably has anywhere from 15 to 20 spices. Most of the spices we get whole and roast and grind. We let that cook for about an hour and we create our own base.”

The curry is made from fresh produce from the Santa Monica farmers markets.

“We use squash, sweet potato, and yams as the base inside the curry,” he said. “We had some vegan and vegetarian customers saying, ‘okay great the menu looks great, but what about us?’ It was a challenge for me to create something like this that’s delicious, healthy, and vegetarian. My take on this dish is that non-meat eaters will love it too.”

Hugenberger learned his craft at the California Culinary Academy in 1997-98.

He then spent almost three years at Melisse in Santa Monica when it opened in 1999 before entering the world of catering, then opening his own restaurants.

He said Library Ale House’s bar menu is extensive with 29 beers on draft and another 15 to 30 by the bottle. There are also about 10 glasses of wine by the glass and about 35 different bottles.

Library Ale House is also about to launch a new $10 lunch menu Monday through Friday.

“Each day there will be a different theme with a different special,” Hugenberger said. “A lot of the women want a half portion salad instead of a big salad, that sort of thing. There will be different combinations of stuff like that.”