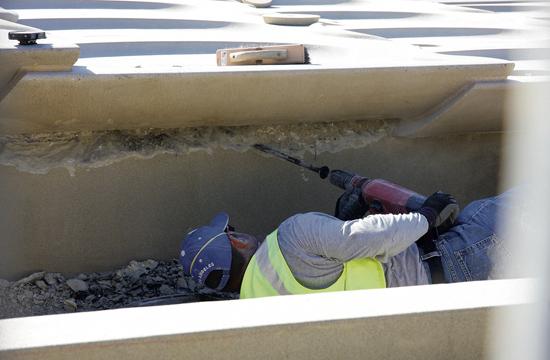 With the new multi-tiered fountain in front of City Hall still leaking – and past its original September completion date – the City of Santa Monica has set a deadline for the contractor to finish the project before incurring financial penalties.

Santa Monica Director of Public Works Martin Pastucha told The Mirror the contractor has until Nov. 4 to complete their work without incurring liquidated damages.

As The Mirror reported in July, there have been serious leakage problems with the fountain since work started on it in April.

In the past six months, the contractor has been seen attempting numerous techniques to stem the leaks from the pre-cast top sections, but to no avail.

The fountain is designed by James Corner Field Operations/Fluidity Design for the City of Santa Monica.

“It is quite obvious from these photos that there are some serious issues with the original design of this important City Hall landmark project,” Garden said.

Pastucha remained confident the project would be completed.

“The contractor is working diligently to complete their work prior to the opening celebration for Tongva Park/Ken Genser Square,” Pastucha said. “The project will not be accepted until it is adequately constructed. The contractor brought in an independent fountain consultant who has provided a course of action to meet the city’s requirements.”

Pastucha said the new subcontractor would not be an added cost to the City.

“The contractor has been working on the water feature for several months to insure that it will meet the city’s requirements,” he said. “The project is still under budget and the leakage problem has not resulted in an increase to the project.”

A community celebration is scheduled for Saturday, Oct. 19 from 11 am to 4 pm for Santa Monica’s Tongva Park and Ken Genser Square.

A special celebration is scheduled for 11 am on Sunday, Nov. 17 at Ken Genser Square, which is one day before the late Ken Genser’s birthday. This event will remember the former Santa Monica mayor’s legacy.