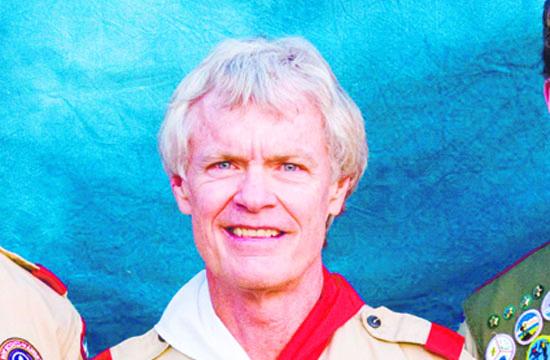 Two Inspirational heroes will be honored for their tremendous contributions and outstanding work in the community — educator Steve Marcy and officer Adam Barry.

I grew up in Virginia where I attended the College of William and Mary. I had several leadership opportunities there, including class president. In 1969 I took a teaching job in Azusa, California, then three years later became a math teacher at Lincoln Middle School in Santa Monica, where I taught until 2006. I began writing mathematics enrichment materials in 1973 and subsequently published eight binders of classroom activities that are now used nationwide. In 1978 UCLA awarded me a Ph.D. in educational psychology.  I am married with four children and four grandchildren.

I became the Scoutmaster of Boy Scout Troop 2 in Santa Monica in 1989 and continue to serve in that role today. This is a large and active troop of over 80 boys. During that time the troop has traveled throughout California and to many other states in pursuit of outdoor adventure. We try to produce responsible citizens for the community, nation, and world. Since I became Scoutmaster, the troop has graduated 162 Eagle Scouts.

As both a teacher and a Scoutmaster, I was thrust into the position of role model. In both contexts, children can be strongly influenced by the example you set. You hope to inspire them by that example. There are many teachable moments to discuss values such as kindness, integrity, and moral courage. You can teach children that they have the power to do something great.

Many well-known figures are my heroes, but Martin Luther King, Jr. stands out. Dr. King demonstrated on a daily basis indomitable courage in an effort to bring freedom and opportunity to all people. He regularly risked his life to demonstrate the power of nonviolence. In my own life, my wife Janis is my hero, in part because she has put up with me for over 40 years. During most of that time, she has served as a high school counselor, guiding thousands of children to a brighter future. She has come to the rescue of many children experiencing desperate difficulties, including a boy and a girl she brought home to become two of our own children. Finally, she is the best advocate you could take into any threatening situation, especially hospitalization. She’ll sleep on the floor night after night if that’s what it takes and has saved my life on a couple of occasions by doing whatever it took to get the care I needed.

I admire people who do the right thing even when it costs more than they want to pay, especially those who commit their lives to the pursuit of social justice. I am in awe of the everyday heroes who risk their lives for others, including police officers, firefighters, medical first responders, and our military in war zones.

I have been employed with the City of Santa Monica for over 16 years and prior to that, I was a Los Angeles County Deputy Sheriff for three years. During my tenure with Santa Monica Police Department I have worked the following assignments: Patrol Officer, 3rd Street Bicycle Detail, Homeless Liaison Team, Robbery/Homicide Detective, Field Training Officer, and K9 Unit. I am currently back on patrol as a Night Watch Patrol officer. I was awarded the “Medal of Courage” for an incident back in 1998 involving a suicidal man with a gun. My partner and I saved a woman’s life while being shot at by the suspect. I was also awarded “Officer of the Year” (along with my partner at the time, Robert Martinez) for our efforts on the Homeless Liaison Team, regarding an influx of parolees and sex registrants we were experiencing in 2002. This award is voted on by fellow officers.

While assigned to the K9 Unit I was involved with many community functions and did several presentations which include: Police Citizens Academy, Career day at several schools, Red Cross Red Tie Charity Event, Neighborhood Block Parties, Chamber of Commerce, The Boy Scouts, Girl Scouts, Rosie’s Girls and our Police Activities League.

I was always taught growing up to respect the police and as long as you weren’t doing anything wrong, they would always be there to help you. I was always drawn to the uniform and badge. There is a lot of pride and dedication that goes with wearing it. The brave men and women who suit up every day and are willing to put themselves in harm’s way without bias or due regard for their own safety is what encouraged me to be the man and police officer that I am today.

My grandfather and high school football coach were my heroes growing up. My parents were divorced when I was born and my grandfather raised me like I was his son. He had very little education but he instilled in me what it means to work hard for what you want in life. He taught me not to expect anything to be handed to you, but to go out and earn it. My high school football coach was one of the few men I feared, but at the same time respected. He taught me how to hold myself accountable for my actions and always kept on me to do better in the classroom. He taught me how to play the game of football with class and sportsmanship (trash talking, fighting and cheap shots were not tolerated).

How do you feel about the Inspirational Hero Award?

I don’t necessarily feel I deserve this honor for doing my job, but I’m flattered that the Chamber of Commerce thought enough of me and my retired K9 partner Landor to bestow this honor upon us.