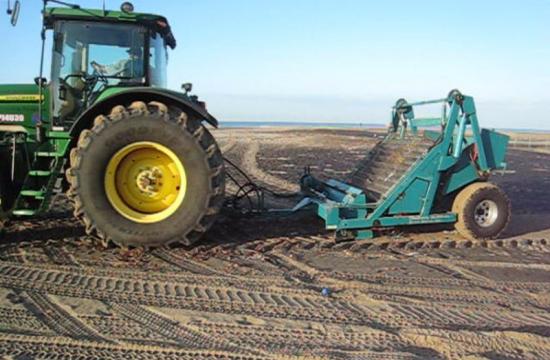 Santa Monica High School teacher and coach of Team Marine Benjamin Kay said of his six years documenting the first flush of plastic pollution flowing out of the Pico Kenter Storm Drain, Wednesday’s was the weirdest.

“Usually, it takes four to six hours of consistent rain for enough rainwater to exit the storm drain, pool parallel to the shore on the dry sand, build up pressure, and then breach the sand bar at the intertidal zone,” Kay said. “When breached, pooled water often takes on the look of a raging river, which can catapult the heaviest beach trash can into the ocean.”

Kay said the one or two solid hours of rain on Wednesday was enough water to push over the storm drain sand onto the beach and cause the sand bar by the shore to give way a little – unplug the drain.

“Untold amounts of plastic entered the ocean, but luckily, the volume of water released by this storm was not enough to carve a deep pathway from the drain directly to the ocean,” he said. “That will happen later though during the second or third flush. Instead the water exited the mouth of the drain, pooled across the sand with its plastic pollutants, and then slowly drained out through a narrower pathway to the ocean thereby leaving behind a graveyard of plastic pollutants and black soot on the once dry sandy beach.”

Unlike any year he and Team Marine has witnessed, a new maintenance tractor helped scoop up some of the larger items of debris Thursday morning.

“Personally, I welcome tractor technology, but the only true solution to reducing ocean gyre pollution is banning plastic packaging, especially plastic bags and styrofoam (polystyrene) products,” he said. “We clearly have both a packaging and a littering problem. Huge applause to Heal the Bay staff and volunteers who performed an emergency beach cleanup Thursday morning and to the students of Team Marine and Marine Biology class who cleaned up more after school.”