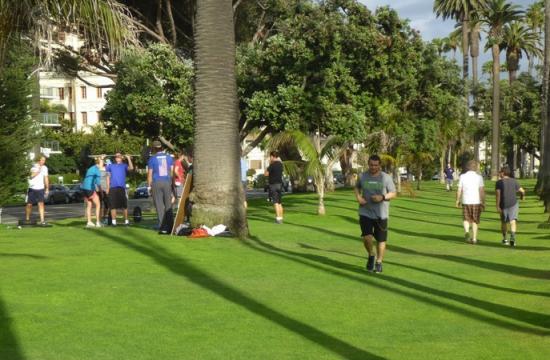 Staying in shape is not always free or cheap. Those providing fitness services within Santa Monica may have to dole out some extra cash if they want to continue providing outdoor fitness classes overlooking the Pacific Ocean.

The Santa Monica City Council will deliberate at its Tuesday meeting an ordinance to allow private fitness trainers to offer camps or classes in public parks or beaches if they pay a fee and maintain a permit.

If approved, the new permitting regulation could bring as much as $63,000 in revenues to City Hall.

According to City staff, the new ordinance, if approved, would make it “unlawful for any person to provide fitness or athletic instruction, classes or camps for compensation in City parks or Santa Monica State Beach without City authorization.”

Also addressed in the proposed ordinance are the “use of heavy equipment in parks,” where commercial instruction is not permitted, and regulations governing group instruction at Palisades Park.

Under the proposed ordinance, private fitness trainers would have to pay between $100 and $150 annually in permitting fees plus 10 to 15 percent of their respective gross receipts to use space at designated public areas to teach individuals or small groups.

The proposed permitting and regulatory system would be tested as part of a one-year pilot program if council members approve the ordinance.

Fitness activities included within the proposed ordinance are traditional exercise, tai-chi, yoga, soccer, karate, boxing, and, as stated by City staff, “other types of athletic activities.”

A key area regulated by the proposed ordinance is Palisades Park and the California Incline area, where group training has been observed both by this writer as well as others who have spoken with The Mirror.

The fourth zone between Wilshire Boulevard and the first public restroom of Palisades Park just north of the thoroughfare is the only zone below the California Incline.

Group instruction at Palisades Park could include as few as two people but never more than 15, as proposed by the ordinance.

Private fitness classes, irrespective of size, at public parks and beaches have been prohibited or heavily regulated in other cities.

For example, all private trainers in Redondo Beach are required to contract with the city and offer their services through city-sponsored classes.

In Manhattan Beach, private trainers are screened and are limited as to when and where they may conduct their classes.

Council members will also vote on a development agreement (DA) for a proposed mixed-use project at 401 Broadway. A developer proposes to bring a five-story building to Fourth and Broadway to house 56 residential units and 4,159 square feet of ground floor commercial space.

The Oct. 8 agenda also includes a proposed ordinance updating City law to exempt drivers of electric and other low- or zero-emission vehicles from making payments at parking meters within Santa Monica.

Input from council members, residents, and the community at large will be included in The Mirror’s upcoming coverage of these issues throughout October.