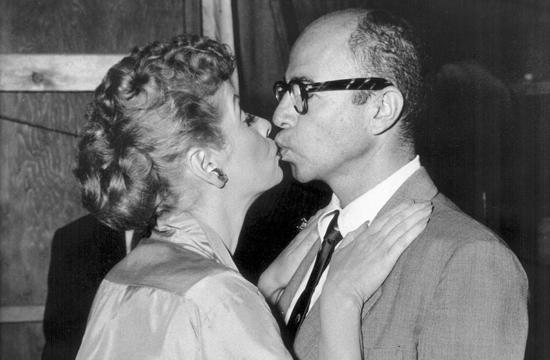 In Part 1, Gregg Oppenheimer talked about his life growing up with the man who created “I Love Lucy,” his life as a lawyer, and changing his career path.

The following is Part 2 of the interview with Oppenheimer and has been edited for content and continuity.

What was your mother, Estelle, like and what was her role in your life?

Gregg: No one has ever asked me that before. She was very nurturing and was the nicest person in the world. She was a great mother and I loved her very much. She died a few years ago and I miss her.

How did your mom and dad meet and was it love at first sight?

Gregg: During World War II, there was a program called “G.I. Jill,” and Mort Werner, who went to school with my dad and later became head of programming at NBC, was head of the Office of War Information. They were stationed in the same building and every weekend Mort would go down to Wallichs Music City, the biggest record store in Los Angeles, and pick records he would play on the “G.I. Jill” radio program for the servicemen. My mom was the Popular Records Department Manager at Wallichs Music City and she would pick out records for him. He told my dad that there was this girl he should meet. My dad was taken with her and asked her out several times and she said there was a rule against dating servicemen. But he persisted and they finally went out and after several years they got married. She didn’t work after they got married, but she was a great entertainer and we had a lot of parties at the house that I wasn’t invited to (laughs). They made me go upstairs.

What were some of the movies you admired growing up?

Gregg: The first movie I saw was “Guys and Dolls.” I was pretty young, around four or five, and fell asleep (laughs). When I was a kid, I loved “The Great Escape,” Michael Caine’s spy thrillers, and James Bond movies.

Did you ever want to be an actor?

Gregg: No. No. I never had an interest in acting. My dad started as an actor but realized he was too self-conscious. The funny thing is, I love public speaking, which I hated when I was a lawyer. I think the difference is the stakes are less. If you make a mistake when you’re a lawyer, there can be serious consequences for somebody. If I forget to say something and I didn’t get as big a laugh, it doesn’t really matter. Even after I started doing book tours I was reading from notes and on these tours, you’re supposed to read from your book and I would do that and didn’t really enjoy it and was stilted. If somebody just came up to me and said tell me about your book, I could do it. I didn’t need notes. So I threw the notes away and decided if I ran out of things to say, I would take questions and ever since then I love talking.

You received degrees from MIT and Berkeley Law School. What motivated you to give up practicing law and devote yourself to the memory of both your father and Lucy?

Gregg: When I started practicing law at O’Melveny & Myers, it was more of a profession but as time went on, it became a business. When I started in the 70s, you had relationships with institutional clients, not just individual clients, but by the 1980s, when all the New York firms came to L.A., the competition became so intense that we had to do a presentation called a “dog and pony show” or a “beauty contest” for every new deal.  It was about whom had the lowest price so I was spending more than half my time in business development. After my dad died, I went on sabbatical. He had started his memoirs and I decided I wanted to finish it.

How did the creative gene you got from your father manifest?

Gregg: At M.I.T., I was in the Architecture Department and was an Art & Design major. O’Melveny & Myers had a newsletter that was like a newspaper and I was editing that. I was also involved in the redesign of the lobby of O’Melveny’s downtown L.A. high-rise, which the firm owned and eventually, I did all the intellectual property work. I was drawn to anything creative and found that I liked that more than I liked the law, even though I liked the intellectual challenges, but trying to get clients or salesmanship was not my thing. I did go back to work after finishing the book but it took me a couple of years to find a publisher and when I finally found one, I thought maybe somebody else thinks I can write, not just me. So, I quit after 18 years.

Did you have a big challenge to overcome in life?

Gregg: Do you mean walking in my dad’s shadow? I’m not really intimated being in my dad’s shadow. I think it presents an opportunity and also an obligation. When I was much younger, I got involved in politics in Boston and I remember talking to the press secretary of the presidential campaign on which I was working. He said you know you’re always going to be in the shadow of your dad. He’s the guy behind Lucille Ball. I like nothing more than to talk about my dad, but it’s also a lot of fun to actually create things yourself. I did a lot of recreations of “My Favorite Husband,” the show my dad wrote with Bob Carroll, Jr. and Madeline Pugh. The first time I wrote some lines that got a laugh, it was amazing.

Did your parents cheer you on?

Gregg: They were happy with whatever I wanted to do except my dad didn’t want me to go into show business because it’s all luck, being in the right place at the right time.  He knew how lucky he had been in his career.

Why did you finishing writing your dad’s book “Laughs, Luck and Lucy”?

Gregg: Part of the reason was because my dad seemed to have been written out of television history. After he died, I would go to the television section of bookstores looking for him in all those books and he wasn’t there. In fact, his name was left off as a writer on “I Love Lucy,” which I thought was bizarre. His name was in the credits but for some reason he wasn’t listed and someone else was credited as the producer of the “I Love Lucy” pilot. So, I started writing letters to authors of some of those television books and finally decided that the only way I was going to get my dad’s name back into the history books was if I write my own book.

Besides writing, what other creative talents do you have?

Gregg: I’ve done artwork and sculptures. When I was taking sculpture courses, it was three hours a week.  I would leave the law firm and that was my escape from practicing law. When I was on sabbatical, Debbie signed me up for more sculpture classes, but I wanted to be home writing.

Going forward, how do you see yourself?

Gregg: I’ll have to see what comes next. I like stand-up and have talked to an audience before and I really enjoyed doing that and getting a few laughs. But I really don’t think I want to be a stand-up comic. I’ll see what opportunities come along.

Anyone interested in the I Love Lucy Collectionary Club can visit http://collectionary.com/club/i-love-lucy.