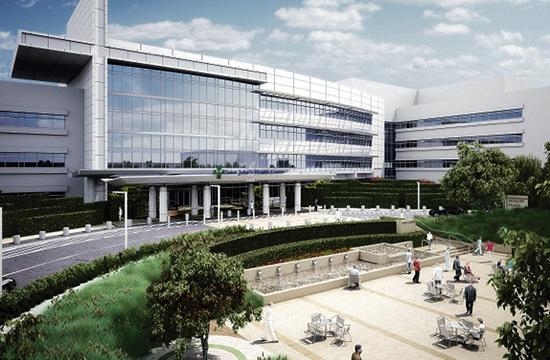 “When you move to a new house you call your friends and neighbors to come see what you’ve done. We happen to have a lot of neighbors and we’ve invited them all, all the people of Santa Monica and we’re going to have fun,” said Sister Maureen Craig of Saint John’s Health Center, speaking about the Saint John’s Community Open House and Health Fair. The Open House will be held this Saturday, Oct. 5 from noon to 4 pm.

The event will celebrate the grand opening of its new Mullin Plaza.

John Robertson M.D., the Medical Director of Thoracic and Cardiovascular Surgery at Saint John’s and the Chair Elect of the Saint John’s Health Center Foundation Board of Trustees, encouraged the community to attend the Open House event.

“Visitors will be able to tour the hospital, including the open-heart surgery and orthopedic operating rooms, the Women’s Health Center, and the Chapel,” he said. “I will be there, along with Saint John’s medical staff to meet guests and provide information about services and departments at Saint John’s. Special activities for children include face painting, arts and crafts and, of course, healthy snacks.”

The 1994 earthquake that caused severe damage in Santa Monica and in Los Angeles also severely damaged Saint John’s. After almost 20 years of rebuilding, using the rebuilding as an opportunity to incorporate the new technology in health care, construction of the new hospital is complete.

The idea to build a new hospital in Santa Monica began in 1939 when a group of Santa Monica doctors went to Kansas and asked the Sisters Of Charity to come to Santa Monica to help start a hospital.

The nuns came and their first task was to go door to door in the City to get the money to buy the land for the new hospital. It was a difficult time because of the war but the city wanted the hospital and it was built with charitable donations.

Supplies were also hard to get and couldn’t just be ordered. In response a group of women in the community formed the Women’s Guild of Saint John’s. The Guild made sheets for patient beds, curtains for the rooms, and bandages for burn victims.

Saint John’s first opened its doors on Oct. 26, 1942 with 52 beds. By 1952 they had to add another wing to the hospital. It was the end of the war and the hospital was serving a greater number of patients and the many doctors who had come home from the war and joined the medical staff at Saint John’s.

Fifty years later, as part of the Jubilee Year Celebration in 1992, almost a thousand people attended a community open house very much like the one planned for the celebration on Saturday. Medical staff were there to meet and greet, to explain services and equipment, and visitors toured the hospital.

“One thing that hasn’t changed is that whenever a baby is born we play Brahms’s lullaby on the PA. If twins are born it is played twice. People just stop wherever they are and smile.

“The Open House is a sign that we want to continue to make people feel welcome, at home, and that we care about our neighbors and the City. Our mission is to make everyone feel at home.”

In the last few years Saint John’s has also gone through a change of ownership. The storied hospital received competing bids from UCLA Health System, Ascension Health Alliance and Dignity Health as well as a bid from Patrick-Soon-Shiong, a bid made with the support of the local Archdiocese, and from Providence Health and Services.

Dr. John Robertson was keen to have the Open House and to make sure that everyone felt welcome.

“This is a way for Saint John’s to open our doors and invite people to see how beautiful the new hospital is,” Dr. Robertson said. “It’s a way to say thank you for being there for us through all the years of construction and all the problems that created. We are back better than ever. We’re excited about being with the Providence Group. We are one of the top 50 hospitals in the country and we plan on getting better every year.”

Underscoring Dr. Robertson’s invitation to the community, Sister Maureen said, “Our venue may have changed, the technology may have changed, but our values have remained the same – great care in comfortable surroundings in a community we love.”

Among the many reasons we have to be grateful for living in Santa Monica is the excellence of the health care in our City. We are truly fortunate.