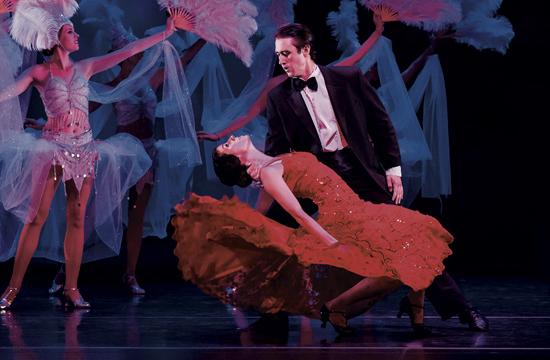 “An American Tango – The Story of Veloz and Yolanda” pays homage to Frank Veloz and Yolanda Casazza Veloz, a very famous dance couple in the 1930s and 1940s who graced the cover of “Life Magazine” which declared them the Number One Ballroom Dance Couple in America. At the height of their careers, they were earning $8,000 a week, a huge amount of money for that period.

Their colorful lives are re-enacted through the dazzling dance narrative conceived and written by their son Guy Veloz, and choreographed and directed by William Soleau.

Two performances were held at The Broad Stage in Santa Monica on Sept. 21 and 22.

With a profusion of stunning gowns designed by A. Christina Gianni, based on Yolanda’s original wardrobe, this highly accomplished company takes us back to the prohibition era when Dutch Schultz dominated the gangster scene and became the dance team’s benefactor.

With the guidance of some of their seedy friends, Veloz and Yolanda took their dancing from dives in Havana and Miami to an unprecedented appearance at Carnegie Hall and a rare performance at the famous Hollywood Bowl in Los Angeles where they continued to dazzle audiences with their grace and beauty.

In a dance journey back in time, dances of a particular era, illustrated through vintage photos in the Multimedia Design by David Bazemore and William Soleau with shots of soup kitchens, tenement buildings, and beer barrels, the skilled company brought back to life popular dances of that era including the Cake Walk Lindy, Charleston, Waltzes and the impeccably executed Tango, all of which were accompanied by the traditional music of that time composed by Aaron Copland, Duke Ellington, George Gershwin, Fats Waller, Angel Villoldo, Ismael Betancor, Jimmy McHugh, Lalo Schifrin, and Astor Piazzolla.

The story moved forward through the use of the narrator and the team’s manager Auggie, played by Joseph Fuqua, who broke the fourth wall and spoke directly to the audience and then seamlessly joined the dance action.  Two highly skilled dancers played the dance team – Jack Stewart as Veloz and Leila Drake as Yolanda – both of who embodied this famous couple, and took us through the good times and the bad.

We see, through dance sequences, Veloz’s propensity for gambling, excessive drinking, and cheating on his wife with the ultimate devastating effects it had on his marriage.

In one of the outstanding poetic moments, a graceful dance routine was performed by Drake and Stewart concurrently with the original Veloz and Yolanda as projected on stage in the multi-media design – truly a showstopper.

While the entire company danced to perfection, some of the featured dancers included Randy Herrera as Dutch Shultz, Cecily Stewart as Jean Veloz, and Gary McKenzie as Walter Winchell.

The only sad thing is that “An American Tango – The Story of Veloz and Yolanda” had only two performances so those of you who didn’t see his delicious program missed out on a very special dance experience.

If this is performed again in Santa Barbara, it’s worth the drive.

For more information on the St Street Ballet, visit www.anamericantango.com.