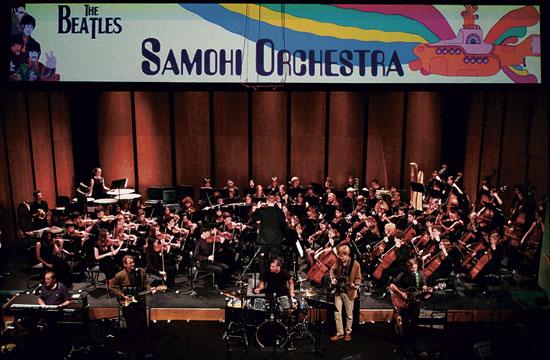 A celebration of the music of the Beatles featuring the award-winning Santa Monica High School Orchestras – also known as Sir George’s Army in tribute to Beatles producer Sir George Martin – returns to the stage tonight.

Dubbed “The Beatles at Barnum III,” the show will be hosted by humorist and noted Beatles historian Martin Lewis for the third consecutive year.

“The Beatles at Barnum III” starts at 7:30 pm in Barnum Hall, on the campus of Santa Monica High School.

“This is a rare opportunity to experience Beatles music performed live by a full-size orchestra together with a rock band – with the added bonus of hearing entertaining stories about the group,” said Joni Swenson, director of the Samohi Orchestras. “This show is not to be missed by anyone who loves the Beatles.”

A protégé of Beatles publicist Derek Taylor, Lewis will share personal anecdotes about the Beatles and provide context about the music the audience is hearing.