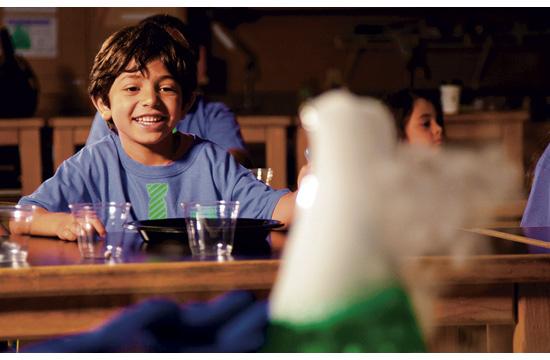 Having played and taught soccer for their entire lives, the brothers knew the level of excitement needed to enthuse young minds about science.

“We actually have a sports background,” Gary said. “And we’ve always been coaching, and the way that you coach kids positively is with a lot of enthusiasm and a lot of energy. We saw that there was a big need for exciting science.”

The brothers then began researching different methods of teaching, from projects to games and beyond, they found themselves enthusiastic about the potential effect their non-traditional program could have on students in Los Angeles County.

Some of the schools they work with in and around Santa Monica include Delphi Academy, St. Monica, Village School, and Seven Arrows.

“We’ve bought a totally different style of teaching,” Gary said. “We’ve developed a program that is really cool which has made us the number one STEM (Science Technology Engineering Mathematics) program in Los Angeles. We do after school classes, in-school workshops, summer camps, and birthday parties. Our whole goal is to promote cool science. We brought our excitement for science to the class room, and from there Professor Egghead started.”

Each week the Academy focuses on a different topic. Recently, they launched a Mars Exploration instep with NASA’s Mars project. The students and professors discussed travel to Mars and how to sustain life once there.

“We discussed UV light, the conditions and properties of that planet, and greenhouses,” Gary said. “We can’t use the soil on Mars because it has different properties. Everything we do is for kids to think creatively and think outside of the box and have fun with it rather than play video games or watch television. We’re just trying to infuse excitement and creativity back into education.”

Today, the brothers and their specialized trained Egghead Professor staff of 24, work with 45 schools and about 1000 students per week.

Before the Professors are sent to schools they must undergo a specialized in-house curriculum, designed specifically by the brothers.

“We focus on engineering, using LEGO as a medium,” Gary said. “We do classical science, chemistry, physics, astronomy, and biology. We focus on kids from the ages of 4 to 12.”

From the San Fernando Valley to the Southbay area and back to downtown Los Angeles, the brothers are making “Eggheads” out of hundreds of students.

“There is a big need today, especially with both parents working, sometimes more than one job and not being able to afford aftercare,” Gary said. “There is a real need from about 2:30-5:30 pm for kids to have some type of enrichment. Studies have been shown that is time of day when students need most structure. That is generally when trouble happens.”

Gary said the Academy is a for-profit organization, funded 100 percent by parents, that does a lot of outreach.

As for the name “Egghead,” Gary said there was a long standing stereotype that being an ‘Egghead’ is a negative thing.

“In fact, an Egghead is defined as an intellectual… who doesn’t want to be smart,” he said. “We are simply taking that name back.”