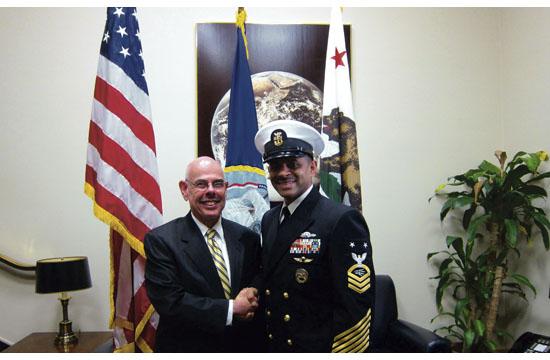 He is currently stationed around the Washington, D.C. area and had the honor of Congressman Henry Waxman (Dem-33rd District) taking part in his reenlistment ceremony on Capitol Hill.

Byrnes said he joined the Navy at age 18 – about a month after he graduated from Santa Monica High School in June 1988.

“My uncle was my influence and served in the Navy, that’s the reason for joining the Navy,” Byrnes said.

He has also served with the Submarine Force at Commander Submarine Group 9 in Bangor Washington, where he learned all the facets of Navy submarine shore communications and had the distinct opportunity to ride and serve onboard two Navy submarines – the now retired research submarine USS Dolphin and Trident ballistic missile submarine USS Michigan – where he qualified as a Trident Radio Operator, something normally only done by a permanent member of a submarine crew.

Not being one to travel down the traditional career path, Byrnes volunteered for and was selected to become Naval Leadership Instructor and taught leadership principles to junior and senior enlisted leaders, a cornerstone personal and professional development for all future Navy enlisted leaders.

Having demonstrated superb technical abilities, Byrnes became a member of the Joint Communication Unit better known as JCU of the Joint Special Operations Command. Not just anyone may become a member of this elite group, as each person has to pass a rigorous five day screening process and is selected by a panel of JCU members and the unit Commander, then must attend a six month school called Special Operations Radio Operator Course. The course consisted of physical fitness, technical, tactical, and survival training skills.

While a member of this exclusive community, Byrnes earned his Navy static line parachute jump wings and made significant contributions to special operations wounded soldiers.

Byrnes is currently a Navy Master Chief Petty Officer in the United States Navy – the highest rank in the Naval service assigned to the Defense Information Systems Agency.

Byrnes said he never thought he would serve a 30-year career in the Navy.

“I always imagined how I could influence sailors and change things to make them right when I witnessed Navy leaders steering sailors in the wrong direction,” he said. “I would get upset in my early Navy days and would say to myself ‘when I make it up the ranks I will do my best to ensure I make the right decisions and take care of Navy sailors.’”

He said he was a proud native of Santa Monica.

“I thank my mom for allowing me to live in the very best community to grow up in,” he said. “I have been influenced by our Californian culture and it will remain with me for the rest of my life. Everything that I do in my daily life is contributed to serve our country and the United States citizens. I would like people to realize that our government and armed forces service members are doing great things all around the world each day.”