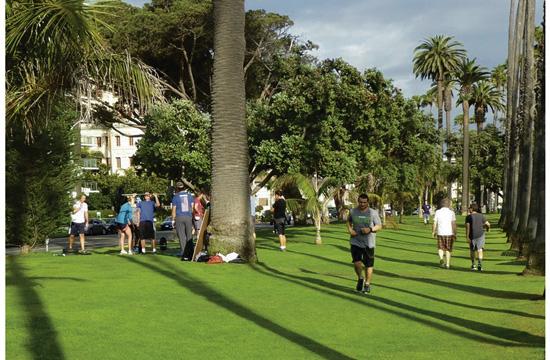 Second readings are rarely fodder for excitement. However, the City Council provided some pre-Halloween fireworks in taking two stabs Tuesday evening to approve in second reading an ordinance regulating commercial fitness training activity at Palisades Park and other open spaces across Santa Monica.

With Mayor Pro Tem Terry O’Day not present at the council’s Oct. 22 meeting, the second reading vote was deadlocked at 3 to 3, with Council members Kevin McKeown, Tony Vazquez, and Bob Holbrook voting against the ordinance; council members Pam O’Connor, Ted Winterer, and Gleam Davis for the ordinance.

Accordingly, the ordinance was technically denied, as a majority of the council did not approve of it in second reading. For a moment, it appeared as if the one-year pilot program establishing four fitness zones in Santa Monica and prohibiting commercial fitness training at Palisades Park every Sunday throughout 2014 would not go into effect.

Less than one hour after the deadlocked vote, McKeown brought the issue back to the dais and asked if his colleagues would reconsider the issue.

The six council members unanimously approved reconsideration before the matter was officially on the dais again.

It was McKeown who changed his vote after reconsideration, with four of the six council members supporting the ordinance as originally approved two weeks ago. Vazquez and Holbrook were the two “no” votes in the reconsideration.

When the ordinance was up Oct. 8 for its first reading, five of the six council members present approved an ordinance outlining outlines fees for and regulations governing fitness instructors who want to use parks, beaches, and open space as a venue to conduct personal or group training sessions.

Trainers would have to pay City Hall a flat fee – as opposed to a percentage-based fee structure as originally proposed – in order to have the privilege to conduct exercise activities at various approve public locations across Santa Monica.

For example, trainers who conduct one-on-one courses would dole out $1,800 to City Hall at approved locations. Trainers who lead group fitness activities of three to 10 people must pay a $3,600 fee, while those training 11 or more people would be dinged $5,400.

If a trainer wants to conduct a training session at Palisades Park, the fees would increase 50 percent, respectively. Conversely, in an attempt to incentivize Reed Park as a venue for commercial fitness training, City Hall would only charge trainers half of the respective flat fee rates to train there.

With the council approving the ordinance on the reprieve of the second reading, it would go into effect in January 2014 and remain in place for a full year. The council would revisit the ordinance again when it expires in 2015, although City staff would update the dais on the pilot program’s progress at the six-month mark.

In December 2012, the current city council voted against a proposed development agreement (DA) for Village Trailer Park during its second reading; however, council members approved an altered version of the DA five months later.

Under city law, any ordinance or legislative act must be voted upon twice before officially going into the books as an active decree.