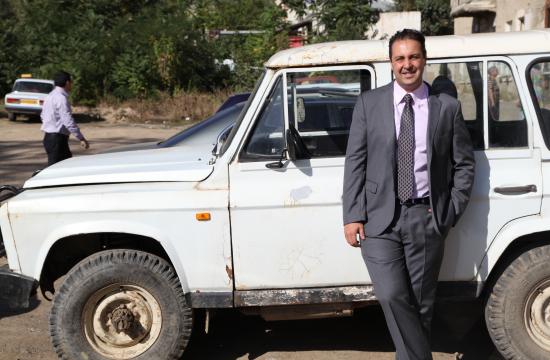 The medical mission marked a cornerstone in establishing state of the art surgical facilities in a region that was devastated by war in the post-Soviet period.

Nagorno-Karabakh Republic shares a common border with Armenia and is populated by ethnic Armenians.

The purpose of the surgical mission was to assess current standards for surgical care at the Central Republic Hospital and to share standards of surgical expertise in the field of plastic and reconstructive surgery.

The trip marks the second surgical mission for the surgeon, who holds active privileges at St. John’s Hospital.

“We often take the level of medical and surgical care that we have readily available for granted,” said Dr. Karamanoukian. “In recent years, St. John’s Hospital has helped me personally donate much needed equipment and supplies to Nagorno Karabakh Republic and Haiti.”

Dr. Karamanoukian was welcomed by the entire surgical and medical community at the Central Republic Hospital and participated in numerous surgical forums.

Medical directors, including those in the fields of vascular surgery, plastic surgery, urology, and anesthesiology proactively interacted with the surgeons during their visit.

The microsurgery instruments were received by Chief of Plastic Surgery Dr. Igor Zakharyan in association with the Deputy Minister of Health, Dr. Karen Ghukasyan.

An established microsurgery center will allow for patients with complex injuries resulting from trauma or cancer to be treated with their own tissue, lending to a more functional recovery.

One of the highlights of the trip, according to Dr. Karamanoukian, was to exchange surgical knowledge in the management of a volunteer who had sustained trauma while defusing a landmine.

“The expert had identified the landmine and was about to diffuse the unit when he tripped and lost his balance,” he said.

“The Central Republican has faced enormous challenges over the last two decades as a result of limited infrastructure and supply capabilities. The sharing of surgical expertise across continents allowed for a productive exchange of information and collaboration.”

Two decades ago, the hospital was bombarded during the war and suffered irreparable damage.

The surgeons of the hospital were forced to treat the wounded in the basement operating rooms.

“It is not only refreshing, but life changing to see and participate in the progress being made in the medical arena in Stepanakert,” Dr. Karamanoukian said.