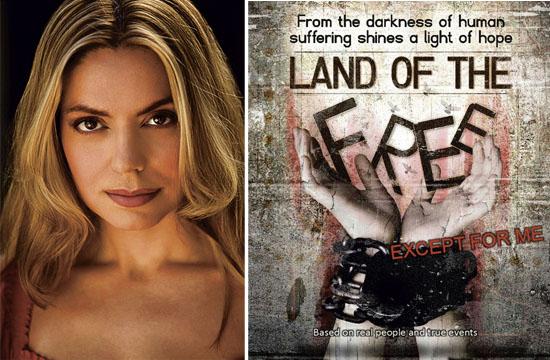 She was a child star in Europe, obtained a Master’s degree at an early age, and then, just as life was shining brightly before her, everything turned dark. She became a missing person for nearly three years, a victim of human trafficking, a captive slave.

Now recovered from her ordeal, and with a revived career as an actress, Santa Monica resident Marie Paquim is raising funds to tell her story in her film, “Land of the Free, Except for Me” through the crowd-funding site, Indiegogo.

From The Heart Productions, a partner with Indiegogo, has agreed to provide fiscal sponsorship for Paquim’s film. Indiegogo provides a platform for filmmakers to present their project to the public and raise much needed capital.

Like her film company’s motto, Paquim’s certainly is a “story that must be told.”

Paquim is bravely taking on the lead role herself, to be an inspiration for others.

“I want people to feel my pain,” Paquim said. “How it feels to be a slave. To be a slave is to be alone.”

When she disappeared, Marie says, her mother, a famous Fado singer in Portugal, stopped singing, and her father, a professional dancer, stopped dancing.

“It’s not just me who suffered,” says Marie. “It was my parents.”

Like all victims of this terrible worldwide epidemic, the pain is passed on to those they leave behind.

Referring to the ironic title of her film, she adds, “How many except for me’s are out there?”

“The numbers are in fact staggering, from an estimate of 27 million just a few years ago, it has now risen to well over 30 million slaves world wide,” she said. “And, it is now the second black market in America.”

Remembering her inspiration and goals, Paquim, after her rescue chose to return to Los Angeles with her rescuer and boyfriend at that time, to resurrect her acting career. Ironically, Paquim, though she had multi-lingual ability, did not speak English when she was taken captive in Los Angeles.

She took six months of ESL at Santa Monica College, then jumped to English One.

“One of my teachers asked, ‘Are you an actress? Or are you a writer? Because you’re so good, you just pick up language so easily.’ And I said, ‘Well, I studied Latin. And English, ironically, they call a Germanic language, but actually 60 percent of English is Latin. So for me it was easy to learn.”

And now, in her own film, “Land of the Free, Except for Me,” she pays homage to all those who helped her not only survive, but thrive.

Several characters are based on people from real life, including her own mother, who is, like Paquim, to play herself in the film.

“Mom is in film to show that evil does not always win,” Paquim says. “Love always wins, if you believe it.”

And now that journey has led to the making of a feature film, a story written, Paquim says, “from the heart… I’m stripping my soul to the bone with this film. I’m showing my anger, my frustrations, my fears, my hopes, my dreams. And I hope it serves as an inspiration. This film is for everybody. I’ve always thought it’s possible to change someone. I believe music, and images have the power to do that.”

Her film is meant to be that “wake up call,” to fight for something most Americans have taken for granted for over two hundred years: freedom.

Her film, she says, is being made to support those grand ideals of its forefathers, to make this now more than ever, truly a “Land of the Free.”

People who wish to donate to the project visit www.Indiegogo.com, and search for “Land of the Free, Except for Me.” Or, to go directly to the page, visit http://igg.me/at/landofthefreeexceptforme.