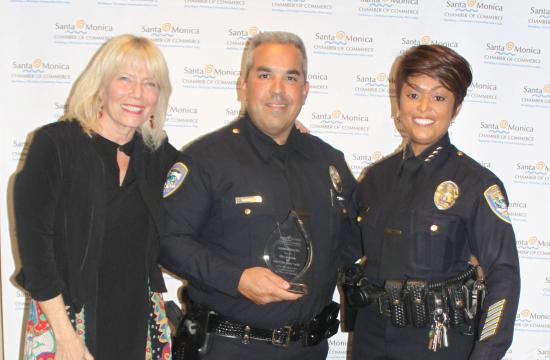 Chamber president Laurel Rosen was emcee of the afternoon.

“This event is one of our most beloved events and a wonderful reason for the community to come together,” Rosen said. “I know we all love meeting our new educators, firefighters, and police officers just to say thank you and welcome to the community.”

Each of the three inspiration heroes received a glass trophy after being introduced to the audience.

SMPD Police Chief Jacqueline Seabrooks introduced Officer Barry, telling the story of how Barry began his law enforcement career with the Los Angeles Sheriff’s Department in 1994 and came to the Santa Monica Police Department in July of 1997.

She said he had worked several assignments at the SMPD including being assigned to the Homeless Liaison Program Team, Criminal Investigations, a Field Training Officer, and a K9 handler with his partner, Landor.

“Adam and Landor worked together from September 30, 2007 until Landor’s retirment this past June,” Seabrooks said. “Landor and Officer Barry were instrumental in helping to capture the suspects from a jewelry store robbery on Montana Avenue this past spring.”

Seabrooks said Officer Barry and Landor were a familiar sight on the Third Street Promenade.

“Landor had many friends who worked on the Promenade and kept special treats for him when he stopped by,” she said. “They were also very popular with local school children and were frequently called upon to provide safety presentations from preschool through high school and our adult Community Academy classes.”

Ben Allen, SMMUSD board member and Chamber of Commerce education committee member, introduced Marcy at the event before presenting his award.

Allen added that Marcy was his 7th grade pre-algebra teacher at Lincoln Middle School and Scoutmaster.

“He is someone who’s devoted his entire life to improving the lives of youth,” Allen said. “He was a fantastic teacher – he taught with humor and with compassion. He did an excellent job teaching a difficult topic to kids at a difficult stage in life and anyone who was a middle school student knows what I’m talking about.”

Allen said Marcy was a shining example of resilience at the Scout Troop.

“He had a little medical scare while he was Scoutmaster and had to take some time off,” he said. “The second he was healthy again, he was right back with the kids leading the Troop. He’s just a warm, compassionate, caring guy who has given his whole life to helping kids in our community.”

Marcy grew up in Virginia where he attended the College of William and Mary. He had several leadership opportunities there, including class president. In 1969 he took a teaching job in Azusa, California, then three years later became a math teacher at Lincoln Middle School in Santa Monica, where he taught until 2006. He began writing mathematics enrichment materials in 1973 and subsequently published eight binders of classroom activities that are now used nationwide. In 1978 UCLA awarded him a Ph.D. in educational psychology. He has been Scoutmaster of Boy Scout Troop 2 in Santa Monica since 1989.

SMFD training division chief Jose Torres presented the Youth Inspirational Hero Award to Franco, who has been volunteering with the SMFD Training Division for about two years.

Torres said Franco is a peer mentor for the El Camino College Fire Academy and assists his father with his landscaping business while attending college.

“Marco’s work ethic is an example to others, he can be counted on to help out in a moment’s notice and has helped us with important training drills and exercise,” Torres said. “He has a genuine heart for helping others and will make a great firefighter one day, as this is his dream.”