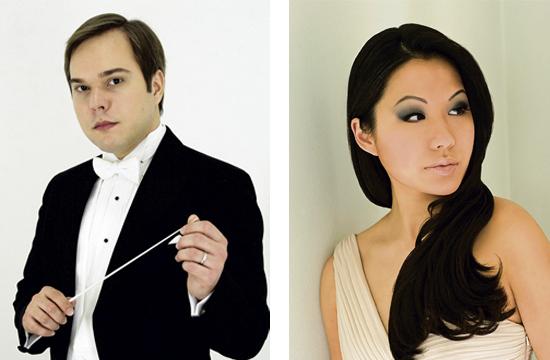 Santa Monica will be able to enjoy the performance Sunday at 4 pm at Barnum Hall on the campus of Santa Monica High School. Additional performances will be held Friday 8 pm in Oxnard and Saturday 8 pm in Thousand Oaks.

Chang was born in Philadelphia in 1980 and began violin studies with her father at the age of four.

Chang made her debut with the New York Philharmonic under Zubin Mehta at the age of eight.

She began making debuts with major orchestras world-wide shortly after her New York debut and began her now 20 plus-years recording collaboration with EMI Classics when she was 10.

In addition to her appearances with orchestras around the world, Chang also maintains a busy international recital career.

He has served for three years as an assistant conductor with the Boston Symphony Orchestra and was recently promoted to associate conductor for an additional two years.

The position of associate conductor was created specifically for him. Maestro Lehninger also maintains a busy guest-conducting schedule throughout North America and in South America and Europe.

The Symphony will again host “Hear & Now Live” before each performance. This lively and informative pre-concert discussion about the music on the program begins at 7 pm on Friday and Saturday evenings and 3 pm on Sunday afternoon. The discussions are free and open to ticket holders for the respective performances.

The Symphony’s first performance will take place tonight at the Oxnard Performing Arts Center, located at 800 Hobson Way in Oxnard. The program will be repeated on Saturday at the Thousand Oaks Civic Arts Plaza, located at 2100 Thousand Oaks Boulevard in Thousand Oaks.

New West Symphony Executive Director Natalia Staneva announced Wednesday that 100 complimentary tickets to this weekend’s concert would be given to those who have been furloughed or otherwise impacted by the government shutdown. Call 866.776.8400 and mention “Government shutdown” to get the tickets.These free tickets are not available at the box offices.