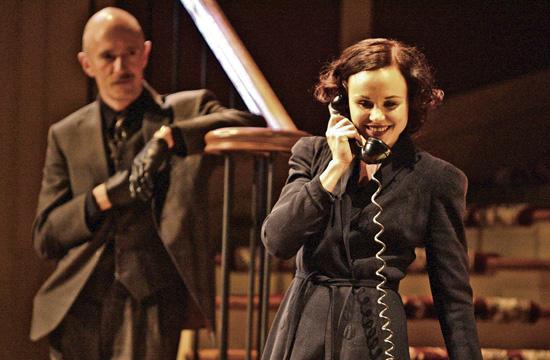 That old saw that says, “You’ve got big shoes to fill,” could apply to Jeffrey Hatcher’s adaptation of “Wait Until Dark,” making its world premiere at the Geffen Playhouse. The original 1966 version written by Frederick Knott starred Lee Remick and Robert Duvall followed by the 1967 film, which starred Audrey Hepburn, Alan Arkin, Richard Crenna, and Efrem Zimbalist, Jr., earning Miss Hepburn her fifth Oscar nomination. Subsequently, a revival of the mystery drama was staged on Broadway in 1998 starring Marisa Tomei and Quentin Tarantino as the quintessential evil bad guy.

Jeffrey Hatcher’s world premiere adaptation of this old chestnut, directed by Matt Shakman, is a yeoman’s effort of trying to breathe life into this inherently flawed material which demands that you put your logic aside and suspend your disbelief.

Briefly, the story revolves around three thugs who are searching for a doll containing diamonds (in productions of the original play, they were drug dealers and the doll contained heroin). Roat (Adam Stein) and ex-New York City cop Carlino (Rod McLachlan) have broken into the meticulously organized Greenwich Village basement apartment belonging to photographer Sam (Matt McTighe) and his blind wife, Susan (Alison Pill) who has learned how to navigate around her apartment easily unless objects are rearranged.

Roat has already killed a woman named Luciana who somehow slipped the diamond-bearing doll into Sam’s suitcase and Roat is convinced that the doll is in this apartment.  Not knowing where else to hide the body, he hangs her on the inside door of Susan’s closet. Carlino wants no part of the murder, but is bullied into submission by Roat who informs him that he is already in over his head.

Now, Susan arrives back at the apartment while the two intruders are still there, but since she’s blind, we are to believe that she doesn’t sense their presence and when she opens the closet to get something out, somehow she doesn’t realize that there is over 125 pounds of a dead woman hanging on the hook. Ironically, later in the play, Susan boasts that when you lose one sense, the others become keenly acute. Susan makes a phone call to her husband and leaves the apartment to meet him at his studio, coming within inches of Roat, who is standing on the stairs leading up to the front door. Remember. Suspend your disbelief. It should be noted at this point, that throughout the entire play, the characters freely walk in out of the door to the apartment, almost like the shenanigans of a French farce, sans humor. New Yorkers generally dead bolt their apartments and use multiple locks.

Enter now the surly upstairs teenager Gloria (Brighid Fleming) who has a key to the apartment which she uses as a sanctuary when her mother is entertaining a gentleman.  For some reason, she denies that she’s wearing glasses and for another inexplicable reason, winds up dumping the silverware drawer on the floor which doesn’t really seem to upset Susan who kneels down to retrieve the scattered contents. Gloria does help her restore the knives, forks, and spoons to their rightful spot.

The revolving door turns once again and enter Mike (Mather Zickel), dressed in an Army uniform. He is convincing as Sam’s buddy and before long it appears that he is looking after Susan who is growing suspicious of Carlino, who has questioned her about the missing doll. Yet another character barges in and goes straight to Susan’s bedroom and steals something. Turns out he is Luciana’s father-in-law who suspects that she was having an affair with Sam. Oy.

By this time, Susan is really afraid of what she perceives as the looming danger and sends Gloria to fetch her husband. She booby traps her apartment by removing all the fuses except one thinking that if the apartment is pitch black, it will be hard to find her. Roat returns and after some thrashing around in the dark makes his way to that damn fridge. And, let there be light – and there was.

So, ask yourself these questions:  Did Sam really have an affair with Luciana? Was he involved in hiding the doll? Did Mike really serve in the Army with Sam? What did Gloria do that she needs to hide from Susan? What happens when Gloria confesses?  How is Susan going to elude that nasty Roat? How is this all going to end?

Technically, set design by Craig Siebels is spot on with the traditional dropped living room, as is the wardrobe by Costume Designer E.B. Brooks, and interesting lighting effects by Lighting Designer Elizabeth Harper. Composer and sound design by Jonathan Snipes didn’t quite hit the mark as the spooky music wasn’t, well, spooky.

All this said, the production had great audience appeal with the actors receiving a standing ovation, so for those of you who are unfamiliar with Frederick Knott’s original play, and the award-winning actors who played the original roles, you might find the current production entertaining, but be sure to rev up your suspension of disbelief.