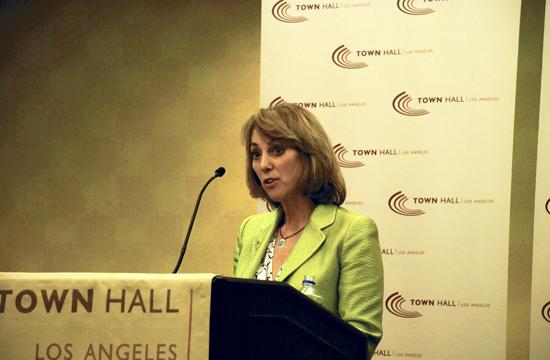 The new president-elect of the American Association of Retired Persons (AARP) was in Santa Monica Thursday, Nov. 14 to deliver a speech about the growing number of people aged 50-plus, who are living longer and want to do more in their later years.

Jeannine English, who’s had a career in California state government and will become AARP’s president in June 2014, spoke to an audience of nearly 100 people Nov. 14 at the Santa Monica DoubleTree Hotel. The event was organized by the nonprofit public forum Town Hall Los Angeles.

Every day 10,000 Americans are turning 65, said English, and by 2030 a third of Americans will be over 50. English believes their chances of finding fulfillment in their later years is better than ever.

“The new generation of seniors – the baby boomers – want to be more active and engaged than any generation before,” she said.

Many are looking for second or third careers after retirement, and they want to use their talent and experience to give back to their community. English said half of their membership aren’t retired.

Technology is starting to play a bigger role in helping seniors stay healthy, active, and engaged, said English. Examples are fall sensors that recognize impact when someone falls, medical management systems that ensure medications are taken exactly as prescribed, and smart phones and apps that help people live independently at home longer.

English told the audience about AARP’s new “Life Reimagined” initiative, an online resource for seniors who are looking for ways to open new chapters in their later years. The website helps seniors assess where they are in life, consider possibilities for the future, and learn how to make transitions to a new life. “Today, we’re never too old to dream,” she said. The website’s address is www.lifereimagined.aarp.org.

California has the nation’s highest percentage of seniors over 65 who are economically vulnerable – 55 percent, according to an Economic Policy Institute study cited by English.

“Too many seniors today are one bad economic shock away from significant financial hardship,” she said.

English said social security is a lifeline for many seniors, and that AARP will continue to advocate for policies that support the health and economic well being of its members.

AARP evolved from an organization started in 1947 by a former principal of Lincoln High School in Los Angeles, Dr. Ethel Percy Andrus. Andrus founded the National Retired Teachers Association because she wanted to help retired teachers find health insurance at a time when private health insurance wasn’t available to seniors.

Since non-teachers also needed similar help, AARP was later started for all Americans. AARP now has a membership of more than 37 million people, according to its website.