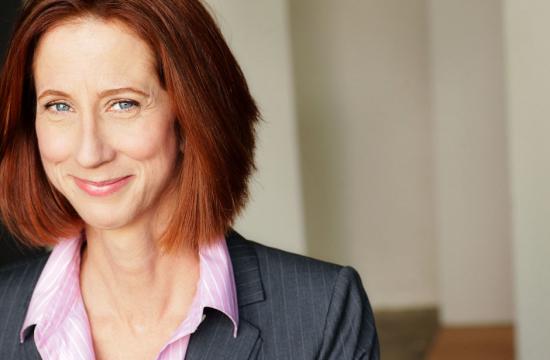 Actress/comedienne Mary Stein sparkles on-screen and on-stage this month, after appearing on the new FOX crime-comedy TV series, “Brooklyn Nine-Nine” on Nov. 5 and then with her special stage performances in “Too Long Ladies & A Guy Named Jeff” in Santa Monica this weekend.

On Nov. 15 and 16, Stein joins together with fellow performers Anne and Jeff Grimaldo, of dance company “Naked With Shoes,” for a special collection of live-performances known as “Too Long Ladies & a Guy Named Jeff,” at Highways Performance Space in Santa Monica.

This evening of theater dance with European inspirations of Pina Bausch and Cirque du Soleil merges theatre, dance and film with live music from the Liquid Skin Ensemble.

During the evening, Stein will dance with Anne Grimaldo, two six-foot tall lanky redheads, in “Too Long Ladies & A Guy Named Jeff,” and then perform a physical comedy piece, “Baby, Oh Baby,” inspired by her experience working with Cirque Du Soleil.

Stein is thrilled to be strutting her brand of funny to audiences this November.

“I loved working on ‘Brooklyn Nine Nine’ where there was continual rewrites and improvising throughout – hilarious stuff,” Stein said. “And, I think ‘Too Long Ladies & A Guy Named Jeff’ gives audiences what they’re thirsting for…something completely playful and original that delights them and makes them laugh!”

Later this season, Stein returns to the FOX network on the hit-series, “Glee.” In the episode titled “Puppet Master,” Stein enrolls in the fun as a school board member appearing alongside Jane Lynch.

For more information on this weekend’s performances, visit www.highwaysperformance.org.