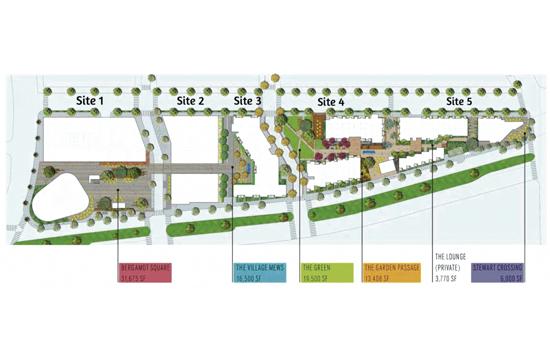 After three public hearings on the matter, the Santa Monica Planning Commission on Wednesday night resumed its consideration of the mixed-use development agreement (DA) proposed to be built at Bergamot Transit Village Center by Hines 26th Street LLC.

The meeting focused on “outstanding design issues” commissioners believed “were not adequately addressed” by Hines during the most recent round of public hearings.

When the DA was last in front of the Planning Commission, several design elements were singled out as requiring improvement, including open space, floor plan configurations, and retail use, among other issues.

Commissioners also asked how Hines would execute its plan to plant mature trees above a parking deck.

With respect to Buildings 1 and 2 of the project, commissioners wanted to see more “creative floor plan configurations and spaces to support vision of Bergamot area as a creative center.” Commissioners also wanted the developer to consider adding housing to Building 2.

In Building 3, commissioners suggested reconfiguring courtyards “to form one larger open space with consideration for shade and shadow.”

Also suggested was a “stronger edge to the pedestrian pathway between Buildings 2 and 3.”

Over in Building 5, commissioners suggested clustering retail uses there to the east end of the structure while reconsidering a restaurant on the west end “to ensure north-south permeability through the site.”

Also suggested for Building 5: a “formed public space” at the intersection of Olympic, Steward, and Nebraska “to fulfill role as focal point in the Bergamot Area Plan.”

Other issues at Building 5 included solar access and natural air in exterior common areas as well as natural daylight and ventilation for ground floor residents facing the interior courtyard.

“The Planning Commission’s comments related to the need to further develop the project’s design intent,” City staff stated. “In this regard, the applicant has made substantial progress in responding to the concerns raised, particularly in re-distribution of building mass for Buildings 2, 3, and 5 and clearer articulation and execution of open space concepts.”

Only building design elements were on tap at the meeting; other project issues, such as sustainability and whether it is consistent with the Bergamot Area Plan, will be discussed at the Planning Commission’s Dec. 4 meeting.

According to City staff, Hines made “extensive revisions” since Sept. 18 “to every building and open space in the project with the exception of Building 4, which was identified by the Planning Commission as the only building that successfully met the development standards and design guidelines of the Bergamot Area Plan.”

Hines’ proposal would bring to the Bergamot Transit Village Center a 765,000 square foot multi-use project, though, according to City staff, the building mass would be “redistributed among several buildings.”

“While the development standards in the Area Plan are intended to allow for flexibility and innovation, an analysis of the project’s previous design revealed that its significant deviations from the Plan’s development standards could not be justified due to the lack of physical innovation in the building design and a need to rethink interior and exterior spaces,” City staff stated of Hines’ initial iterations of the multi-use development.

However, City staff acknowledged Hines “has made substantial progress in addressing the Planning Commission’s design concerns with the project.”

Accordingly, City staff recommended the Planning Commission move forward with the revised project designs “with specific conditions for [Architectural Review Board] review in the areas of access to natural light and air for the ground floor units facing the interior courtyard of Building 5, the design solutions for urban runoff mitigation, and the use of building typologies, building form and materials to achieve the objectives for physical innovation in building design.”