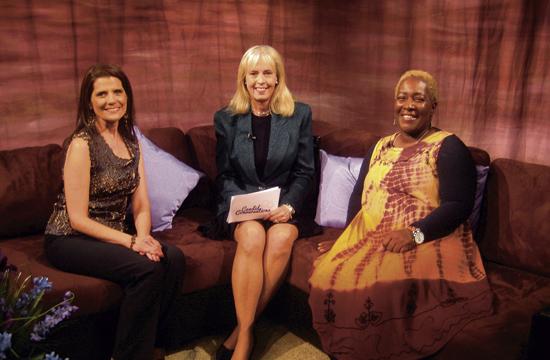 Hosted by Sandra Siepak with co-hosts Dena Diamond and Becky Lantry, the weekly half hour talk show has been airing at 8:30 pm Fridays since Nov. 15 on local cable station Channel 16 (Time Warner Cable).

City TV manager Robin Gee says she approached the Santa Monica Commission on the Status of Women (COSW) earlier this year about partnering to create the show.

Last week was the taping of their eighth show. The topics included self-defense, violence, and tips on maintaining safety and awareness.

She says women are natural champions for positive change.

“When you educate a woman on anything,” Brienda-Ramnath says, “you can guarantee that she is gong to be a spokesperson for that information if it worked effectively for her. For example, it can be as simple as finding a nice nail color that you love and down to something more pivotal like anything that is happening in the health world, breast cancer survivor, health issue. Whatever was required of that woman to go down that path to find a solution in her own way, she will be a natural educator to her community and that is something that has always intrigued me about the female energy – is that we are natural educators.”

She discussed women’s safety issues, both online and offline.

The partnership between the COSW and “Candid Conversations” has allowed for more relevant topics unique to Santa Monica.

“We present great topics,” Siepak says. “We are every day women – we are not models or actors. We share the realism factor and we apply it to our role on the show. We offer our own everyday life scenarios, concerns, and real life issues we deal with on a regular basis and that really make a difference and resonates to audiences out there.”

Siepak has an entertainment journalism background. Gee approached her to be the main host; she also writes the weekly shows.

In 2009, co-host Becky Lantry was appointed to the COSW. She says she has worked as an advocate for children and women citywide.

“I have a different view because I am blind,” Diamond says, “and that was important for Robin to put me in there and offer a view from a community that we don’t necessarily hear from. Santa Monica is such a vast community of all ages. We try to touch on topics from children to seniors so that everyone can take something away from the show.”

The show is a collaborative effort, to boot. What appear to be professional set crewmembers are mostly Santa Monica College students enrolled in a television production course. Students must perform to their professional best in order to receive credit for their course.

Tune in Fridays at 8:30 pm to catch the remainder of season one, which will airs its final episode on Dec. 27.