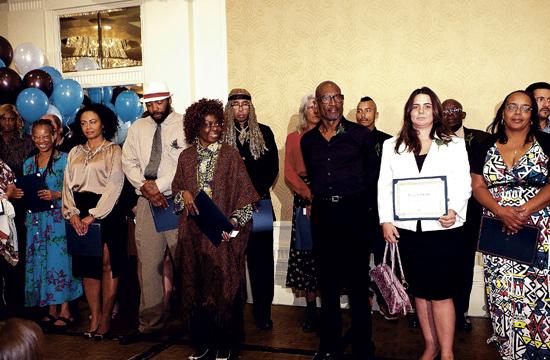 The 18th annual Celebrating Success Breakfast was held last Friday morning, honoring 24 previously homeless individuals who, with the support of local nonprofit agencies, made extraordinary transitions from homelessness to lives filled with passion and promise.

Here are biographies of three of the 2013 honorees:

I was born and raised in New Orleans, the first in my family to attend college. I first experienced homelessness shortly after moving to Los Angeles to pursue a career as a musician. I was not prepared for LA – it was so much larger than New Orleans and felt like an alien planet. I developed a cocaine addiction, and after having a falling-out with the friend I was living with, I became homeless, living on Venice beach. After a few years I overcame my addiction, found employment as a taxi driver and secured housing – living in my apartment for almost 17 years.

In 2007 I was evicted due to a combination of health problems, losing my job and the economic collapse. I was unhoused from 2007 to 2011. While homeless I would go to St. Joseph Center almost daily. It was like a job, a schedule I had to keep. I would often arrive by 4:30 a.m. to make sure I was first or second in line for a hot shower. I also got meals and participated in group sessions.

In August 2011 Venice Community Housing opened Horizon Apartments for chronically homeless individuals and I was able to secure an apartment. Although I have now been housed for two years, I am just beginning to accept that this truly is my apartment, my home. Recently I began playing music again and have been writing columns and poetry for The Venice Beachhead. In the future I hope to reconnect with my family, reconstruct my family’s history and explore my roots in the South.

Eydie was born and raised in Phoenix but moved to LA the first chance she got. Her mom had to keep coming to fetch her back to Phoenix because she kept running away. But she would move back to LA. At 18 she got married. Before she knew it, she had two babies in diapers and soon after, a divorce on the way. Those were simpler times: her girls were raised on a waitress’s salary and, although she didn’t have much she managed. Once the kids were out, however, things started getting worse. She turned to drugs. Over time, using cocaine became ‘like breathing” to her. “It’s very addictive,” she admits. But she got help the same year she started using and moved in with her mom and helped raise her sister’s daughters. Then she moved to Venice beach to help her daughters raise their children.

In 2006 out of nowhere she had a stroke. “I remember having such difficulty trying to find words after the stroke.” At one point she remembers crying because she couldn’t read her own grocery lists. At that point she found Venice Family Clinic where she met Dr. King. During the economic crisis when she lost her home and just barely got by making candles, she found herself homeless. She “tried to afford a single apartment” but “I ended up in my daughter’s garage.” She stayed there for four years even though it was meant to be temporary. But, thanks to Venice Family Clinic, St. Joseph Center and the Integrated Mobile Health Team (IMHT), she has been housed. “I love my home! I can spend my life enjoying my family which has always been the most important thing of all.”

Hello, my name is Bernadette Morris. I’m a 53-year-old mother of three sons and three daughters. I stay in contact with five of my children and am still searching for one of them. Both of my lovely parents are alive and play a huge role in my life. I also have one brother who is surrounded with the despairs of addiction.

I started using drugs in junior high school, which in turn started me on a long path of addiction and homelessness. I was in and out of jail for my addiction and criminal behavior. I was also in and out of many drug programs but wasn’t ready to fight for my sanity, for my children or for my life. After my last arrest the shame and humility of being in jail yet again was the last straw. I was released to New Directions and I believe that this time I was ready and willing to learn how to change everything about me and to change my life. I am so incredibly grateful for the opportunity given to me through counseling, informational groups, therapy, and support groups, and to learn how living in a therapeutic community can help and guide me to become a better mother and a better person. I have a zest for life, a love for those in need and I will always remain grateful for the new life given to me through New Directions.

I am currently employed and have my own apartment. I attend meetings on a regular basis. Most of all I enjoy my new way of living. I thank God for a new way of life.