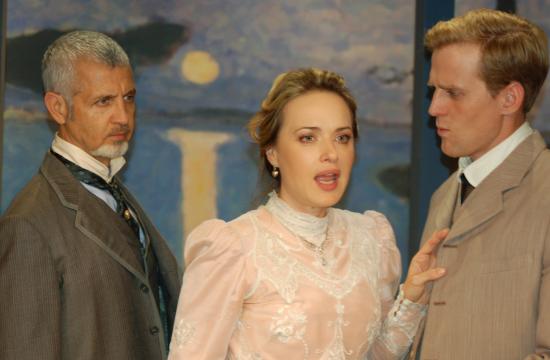 A sexy, savage, darkly comic (and very modern) take on the battle of the sexes called “Creditors” is now running at the Odyssey Theatre through Dec. 15.

A co-production with The New American Theatre, David Greig’s celebrated play has a limited run as it makes its Los Angeles premiere.

Trainer, having worked with some of the best actors in American Theatre (“Foxfire” on Broadway and at the Ahmanson Theater, with a cast that included Hume Cronyn, Jessica Tandy, and Keith Carradine), knows how to create a compelling theatrical experience. He has provided a little insight for what audiences can expect.

SM Mirror: Do you think Strindberg translates well to modern American audiences, or would most of his work benefit from updated translations/adaptations?

David Trainer: Strindberg put extreme, passionate, vigorous, smart, funny characters in intense situations, and let them go at each other. The best translations sound like real people actually talking. David Grieg makes them sound like people you could hear in the next room.

SM Mirror: When did you first discover this piece?

About two years ago, I was looking for a play to do with Jack Stehlin. I love Strindberg, but a lot of the translations feel literary rather than theatrical. For some strange reason, “Creditors” is not often produced. I knew of this version, but I’d never seen it. When I read David Grieg’s translation, I thought — this is perfect!

SM Mirror: Can you talk about the title? What does the name “Creditors” refer to in this case?

You can owe someone money, but you can also owe an emotional debt. That’s what “Creditors” is about. The characters have each sacrificed for one another, or damaged each other, or consumed more life than they’ve given back. The play is about balancing the emotional ledger, just the way a debtor has to pay back money, only the currency here is love and passion, and the price is very high.

SM Mirror: Modern young romantics may cringe when they see this. What attracted you to the play?

It’s fluid, fast, and complex, filled with extreme thoughts and feelings, yet always apparently effortless. I thought it would be great to create that experience for an audience.

SM Mirror: What do you say to observers who might find this play to be sexist?

Strindberg admitted his misogyny was just the flip side of his desperate love for women. “Creditors” is built on powerful internal conflicts. For every expression of sexist contempt there’s also wrenching love and desire. Tekla, the female character, is a wealthy, successful novelist as well as beautiful, sensuous, and desirable. This is 1888, remember. Even by today’s terms, Tekla is a very accomplished person, regardless of gender, independent, strong, and self-supporting. She’s not a sexist cartoon.

SM Mirror: What do you think Strindberg was trying to say in this play, and does David Greig’s version stay on point that way?

Strindberg was a dramatist, not a philosopher. David Greig’s translation is so tight and spare, muscular, witty and smart – the drama just pops. Strindberg feels the power of emotional obligation. As a very modern writer, at the dawn of modernism, he’s still very wary of emotional relativism. The younger characters are presented as bohemians, artists without strong emotional boundaries. Strindberg understands why someone might lead a romantically flexible life, he did it himself! But it also scares him, and in “Creditors” he shows there’s a terrible price to pay.

SM Mirror: What can audiences expect to take away from seeing this production?

I hope they say – that was a blast, what a great ride!

There is $3 parking available at the theater, or free street parking.