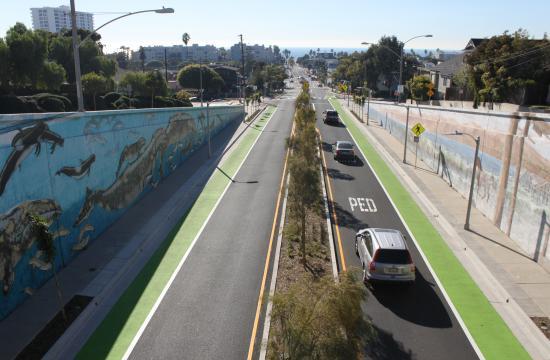 The contract would be between California-based Chrisp Company and City Hall for $523,852.

Once complete, the Green Bike Lane Project would enhance bikeways along Main Street between Colorado Avenue and Ozone Avenue and on Broadway between Sixth Street and Centinela Avenue.

“This project would improve visibility and comfort for bicyclists on Main Street, a popular north/south bikeway and on Broadway, a popular east/west bikeway as part of a prominent bikeway network envisioned in the City’s Bicycle Action Plan,” City staff stated.

The Green Bike Lanes spawned from the Bicycle Action Plan, which was approved November 2011. According to City staff, the Bicycle Action Plan called for “infrastructure improvements to create visible, wider, green bikeways on Broadway and Main/2nd Streets, implementing a visible ‘green cross’ of buffered bike lanes along the most heavily used bikeways in the city and providing good links to all other bikeways and destinations.”

“The green bike lanes on Main Street and Broadway will be installed using the same material and color that was used on the Ocean Park Complete Green Street project, which is performing well approximately a year since completion,” City staff stated.

Located in Rialto, CA, Chrisp Company had worked on another green bike lane project at the University of California, Davis. Other projects under the company’s belt include highway striping projects in the Northern California cities of Danville and Hayward as well as roadway striping projects for Contra Costa County and Berkeley, CA.

The Green Bike Lanes agenda item was part of the Council’s consent calendar.

In a separate matter, council members approved another consent calendar item allowing alcohol to be served at the Santa Monica Historical Society Museum for a pair of fundraising events each year. The museum’s insurance would be updated accordingly.

City law had prohibited the consumption of alcoholic beverages in public buildings and on public property, except when an occupant is authorized by lease, license, or permit to sell alcohol.