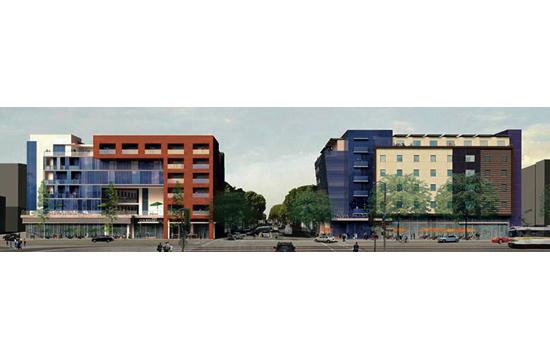 Hotels in Santa Monica are no strangers to news, what with the Fairmont Miramar planning expansion and the Loews Hotel currently serving as home to the American Film Market (AFM). Even hotels yet to be built, such as the proposed Hampton Inn and Suites (Hilton) and Courtyard by Marriott, have been featured on the pages of the local press.

The Planning Commission had since deliberated and chimed in on both hotel proposals, with plans and community benefits significantly different heading into next week’s council meeting than had previously been presented at the April float-up.

OTO Development is the applicant and proposes to bring two “limited-service” hotels to Colorado Avenue and Fifth Street in Santa Monica’s urban core. If approved and ultimately built, both hotels would be one block east of the Expo Line terminus station at Colorado Esplanade (itself expected to be completed by 2016).

A Hampton Inn and Suites would be located at 501 Colorado and would feature 143 guest rooms.

The other hotel, a Courtyard by Marriott, would be at 1554 Fifth Street and include 136 rooms.

Both hotels would be six stories and 75 feet tall and include two subterranean levels for up to 108 parking spots.

According to City staff, separate development agreements (DA) were filed for each hotel; however, a single environmental impact report (EIR) was filed for both proposed projects.

With the close proximity of both proposed hotels to the Expo Line terminus station, City staff predicts the Hampton Inn and Courtyard by Marriott would both make it easier for people to access each property and points due east.

“This regional transportation system will support the transit needs of hotel guests and employees, in particular providing local tourists with broader and easier access to key destinations in the Santa Monica and Los Angeles area,” City staff stated.

City staff also said the proposed hotels are consistent with the goals of the Land Use and Circulation Element (LUCE).

“The proposed project would have a lower trip generation compared to a commercial mixed-use project alternative, as identified in the project’s environmental impact report, which would result in higher am/pm peak hour trips compared to the proposed project,” City staff stated in its report to council members.

City staff added the Hampton Inn project would be a “priority project” since it would be revenue generating.

“Unlike the mixed-use development agreement projects reviewed by the City, the proposed hotel results in a greater positive fiscal impact to the City from annual tax revenues including transient occupancy tax, sales tax, and property tax, generating approximately $1.5M annually,” City staff stated, adding the Hampton Inn project alone “would result in a net fiscal benefit of $1.36M to the City’s general fund.”

Both proposed projects would be union hotels, City staff added.

The DAs for both hotels will likely be considered jointly at the Nov. 12 council meeting. More details of the proposed projects as well as input by residents and council members will be covered in the next issue of The Mirror.