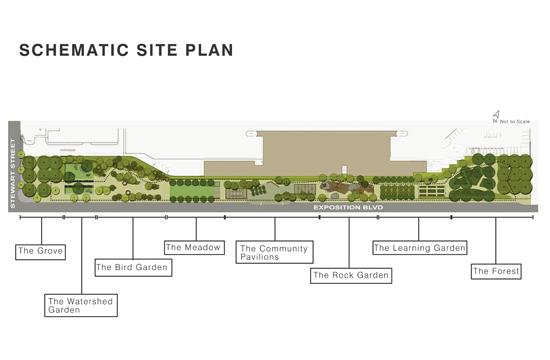 Parks in Santa Monica have made headlines recently. City Hall and Sacramento have been tussling over redevelopment funding for Tongva Park, while private fitness trainers at Palisades Park are soon to be subjected to new fees and regulations starting Jan. 1. As debates ensue over two open spaces surrounding the downtown core, a new park may quietly be arriving near Bergamot Station: Buffer Park.

Proposed to be built next to a future Expo Maintenance Facility, the park is being designed to live up to its name and serve as an open space buffer between the rail yard and Exposition Boulevard.

According to current design plans, Buffer Park is a proposed 2.35-acre linear park located along the north side of Exposition Boulevard between Stewart Street and Dorchester Avenue.

The park’s schematic design plans came to the Recreation and Parks Commission for review Thursday night. While the meeting took place after press time, The Mirror looks at some of the issues commissioners were set to review.

One of those issues: park dimensions.

As the park’s proposed design was linear in shape, City staff stated Buffer Park designers “chose to create a park that plays with the idea of continuity while exploring the concept of small garden rooms where users can experience specific landscape and program elements.”

According to City staff, those eight rooms within the proposed park would highlight contemplations, exercise, gardening, gathering, picnicking, and play.

One room would be The Grove and would include sculpted landforms and mature Ficus trees.

Another room, the Watershed Garden, would, according to City staff, be “designed as a seasonal performance garden” and include riparian grass and shrubs.

“Site storm water runoff will be collected and treated in this area through the change in topography,” City staff stated. “The garden is designed to accommodate rain events during the rainy season and become a serene garden in the dry season.

The Watershed Garden would also include boulders to accommodate informal seating and Sycamores for shade.

“A series of bird towers designed as simple trellis structures will be planted with vines to provide additional areas for birds,” City staff stated.

The Bird Garden proposes to include seven exercise stations, according to plans.

The Meadow would feature a sloped lawn and promote play and relaxation, City staff noted.

“Flowering trees will border the lawn on the northern and southern edges. A low retaining wall along Exposition Boulevard will provide seating,” City staff stated. “At the eastern end of the meadow large steps are proposed. The steps provide an opportunity for seating as well as an informal stage setting for programs.”

Providing a play space for children would be the proposed Rock Garden, which would be universally accessible and, according to City staff, incorporate “play elements that focus on sensory experiences, movement and balance.”

The proposed Community Pavilions would be the formal main entrance to the park and is where people could gather for events or meetings. City staff describes the Pavilions as the “community living room.”

Also proposed is the Learning Garden. Focusng on aspects of gardening, this portion of Buffer Park aims to promote exploring “a new type of garden for the community.” Current plans for the Learning Garden show it would be broken into three zones: an orchard, a lab, and a demonstration garden.

At the east end of Buffer Park would be The Forest, according to plans. The Forest would include Ficus trees to shade the pathway area and regional low planting.

Buffer Park might be in front of the City Council in early 2014, according to City staff.

The park’s name might also be changed, as a community process to select a formal moniker is expected to begin in 2014.

Construction of the park could begin as early as spring 2015. The Expo Maintenance Facility is scheduled be completed in February 2015, according to City staff.

Mia Lehrer and Associates provided the design plan and services for Buffer Park. Three neighborhood workshops were held to receive community input for how the park should look like and what should be included within.