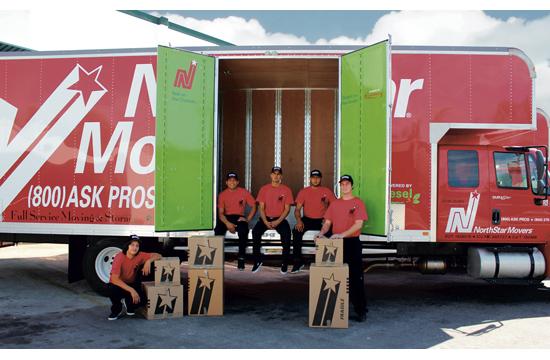 NorthStar Moving co-founders and Santa Monica locals Ram Katalan and Laura McHolm and their team are performing northward in the philanthropic world.

This past summer, the company participated in its first annual “Let’s Send Hunger Packing” summer food drive competition in partnership with Coldwell Banker Residential Brokerage to collect 4,556 pounds of food to feed hungry children in Los Angeles and Orange Counties.

Coldwell Banker Residential Brokerage offices in LA County and Orange County competed for over a month to collect the most food donations for their local food bank.

NorthStar Moving delivered all of the donated items to the Los Angeles Regional Food Bank and Second Harvest Food Bank of Orange County.

NorthStar Moving will give each of these award-winning offices lunch for their entire   staff.

The nearly 20-year-old moving company started in a small Northridge office in 1994 and is presently setting a new industry standard while garnering dozens of awards.

“You know how carpet services (were) and some still are today – they give you a price over the phone and then when they get there they’ll say, except for your carpet because you have this extra spot,” McHolm said. “Moving was kind of like that too. We both felt like that was not the right way to do things.”

Prompted by what they considered fraudsters in the industry, the co-founding pair combined their backgrounds to create a company catered to their clients’ needs in unprecedented ways.

As a youngster, Katalan worked as a mover and later worked for Moishe’s of New York and held various positions within the company, including dispatch, and management positions within several others.

Meanwhile McHolm was an attorney with a marketing background.

“I graduated high school at 16 and started university, so I really felt like looking toward award winning service was something we wanted to do,” said McHolm, a self-proclaimed Type-A personality.

In 2012 alone NorthStar Moving won nearly a dozen awards; the California Apartment Association of Los Angeles (CAA-LA) awarded them three, including one for “Industry Partner of the Year;” the San Fernando Business journal recognized them as one of the fastest growing private companies; Inc. magazine, too, recognized NorthStar Moving as one of the fastest growing privately held companies in the United States; after years of outstanding service, the Better Business Bureau awarded NorthStar Moving with a 10-year recognition award in addition to having made the Bureau’s “Honor Roll” since 2000 for not receiving a single complaint.

In 2008 McHolm won the “Trailblazer Award” at the 7th Annual Women in Business Awards for redefining industry norms and delivering exceptional customer care statewide. Since 2009 McHolm has received nominations for “Women Making a Difference,” an award honoring women for their outstanding work in the community issued by the Los Angeles Business Journal.

In 2010 they were awarded “Best Green Practices” by the CAA-LA.

“When I was going to law school I never thought I’d be the proud owner of a bio-diesel tank,” McHolm said. “We have something like 25 trucks now and those have bio-diesel tanks. Even our bubble wrap is eco-friendly, it’s not made of petroleum-based products. All of our boxes are 100 percent recyclable. We’ll give you a discount for buying used boxes because we try to encourage people to be green. We’ll buy back your boxes at the end of the move so you don’t just throw them away.”

Not only will NorthStar Moving purchase old boxes, they’ll put their clients’ unwanted belongings in the proper hands.

Working closely with Goodwill, Habitat for Humanity, and e-Cycle, they’ve maintained relationships instep with one of their many goals: to responsibly, domestically recycle, a goal shared by those very organizations.

NorthStar Moving knows how to treat the members of their staff, and evidently so. They’ve made both the Los Angeles Business Journal and the San Fernando Valley Business Journal’s list of “Best Places to Work” for several consecutive years.

“We look to our members and ask what is your passion, what do you feel strongly about, where should we be spending our time,” McHolm said about the process of choosing philanthropic endeavors for NorthStar Moving. “Lets figure out how we can help them or put them in touch with somebody who can.”